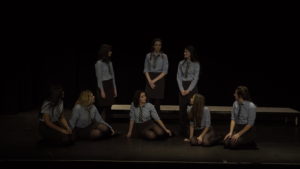 The Customs House Youth Theatre has been performing new work in South Shields and Newcastle over the last few months, with around thirty young actors taking to the stage.

Our Seniors have taken part in the National Theatre Connections Festival, which is the largest celebration of youth theatre in the UK. They performed ‘Musical Differences’ by Robin French on 6 and 7 March at The Customs House. The play is about the formation of a band, and all of the ups and downs they go through before finding their perfect line up.

The group performed before great audiences including Mike Bryher, an associate director of the National Theatre, who said, ‘The whole team should be proud of what you have achieved already; you’ve managed to create a production that showcases the talents and personalities of your company, and one which they feel a sense of ownership and pride over.’

The Seniors performed again at Northern Stage in Newcastle where they shared the bill with Shotton Hall Academy’s performance of ‘The Snow Dragons’. The cast were delighted that the writer Robin French came to see their show, and praised their performance when meeting the group backstage.

Our Juniors were in action at The Customs House on 27 March in a new play written for the group by Rachael Walsh. ‘Yes or No’ is a mystery about a group returning to the scene of last year’s school trip to uncover the truth about the death of their classmate. The group is directed by Jayden Blacklock, who is a former Senior Youth Theatre member, and a student at the University of Sunderland. The Customs House is very proud of the Junior group’s performance, which featured some outstanding talent on display.

For more information on youth theatre at The Customs House, contact Fiona@customshouse.co.uk