Home News When The Boat Comes In Part 2: The Hungry Years

When The Boat Comes In Part 2: The Hungry Years

The sequel to the hugely popular first stage adaptation of the hit TV series When the Boat Comes In is set to dock at The Customs House.

When the Boat Comes In Part 2: The Hungry Years is once again penned by Peter Mitchell, the son of the creator of the long-running Tyneside saga, James Mitchell.
Director Katy Weir and the rest of the cast, led by Jamie Brown as Jack Ford, also return for the next instalment of the tale, which follows the trials and tribulations of its characters during the inter-war years in the fictional town of Gallowshield. 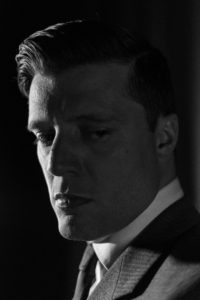 We catch up with former Army sergeant Jack now married to a pregnant Dolly, with no job, no prospects and no hope of escape. The Twenties are no longer roaring on Tyneside and the region is hit by an economic slump. Ever resourceful and with an eye for the main chance, Jack identifies a way out and a way up, but as he focuses on the future, the present is blocked by hatred, jealousy and tragedy.

Peter said: “It was extraordinarily heartening to see the reactions of the audience to When the Boat Comes In when it received its world premiere at The Customs House in August last year and when it returned in March this year. They really seemed to enjoy it and that is what it’s all about. Interestingly, not only did the play attract a large number of people who were familiar with the story, we also seemed to attract a significant new audience. Without giving too much away, I can say that Part 1 dealt very much with the aftermath of the First World War. Part 2 focuses a lot more on how Jack settles into life during peacetime. But critical to the character, of course, is his ambition and his restlessness of spirit. We pick him up married and with a child on the way, jobless and apparently accepting the hand he has been dealt. Needless to say, trouble is just around the corner.” Peter is fulsome in his praise of Jamie’s take on the character, made famous in the TV series, which ran from 1976 to 1981, by Sunderland-born actor James Bolam. He said: “Jamie’s Jack is different, of course, but I find him totally engaging. It’s a massively demanding role and Jamie has stepped up to the mark with great assuredness. I couldn’t have asked for more.”

When the Boat Comes In Part 2: The Hungry Years runs from Thursday, September 12, to Saturday, September 28, with performances at 7.30pm each day and 2.30pm on Thursdays and Saturdays. Tickets, priced from £16, are available from the box office on (0191) 454 1234 or online at www.customshouse.co.uk.