Home News WHEN THE BOAT COMES IN: CAST ANNOUNCEMENT

WHEN THE BOAT COMES IN: CAST ANNOUNCEMENT 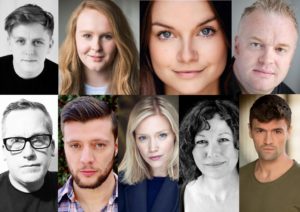 The Customs House is delighted to announce a first-rate cast that will anchor its premiere production of When the Boat Comes In this summer.

The iconic hit TV show has been adapted for the stage for the first time by Peter Mitchell, the son of the original writer, James Mitchell.

The play was commissioned by The Customs House to mark the centenary of the end of the First World War and will run from Thursday, August 16, to Saturday, August 25.

The gritty drama explores the struggles of life during the inter-war years in the fictional Tyneside town of Gallowshield – based on Mitchell’s birthplace, South Shields.

Jamie Brown has been cast in the lead role of Sergeant Jack Ford, originally played by James Bolam in the BBC drama, who returns home from active service to find the place he left is still battling against poverty, ill-health, unemployment and discrimination.

But Jack hasn’t endured the horrors of war to live a life of misery – he has set his sights on the high life and is determined to get what he wants, whatever the cost.

Jamie is known throughout the north east for his roles in The Machine Gunners, The Man and the Donkey, The Fifteen Streets, The Cinder Path and Hadaway Harry, among others.

He also directed Geordie the Musical at The Customs House and Tyne Theatre last year and The Butcher’s Bill at several north east venues last month.

Jessie Seaton will be played by Alice Stokoe, who made her West End debut in Mamma Mia in 2014 and has since starred in touring productions of American Idiot and Sister Act.

Bill Seaton will be played by Steve Byron, an actor/drama practitioner with 25 years’ experience of working within community theatre in the north east.

Mary Routledge/Mrs Scrimgour will be played by Sarah Balfour, from South Shields, who graduated from the Academy of Live and Recorded Arts (ALRA) last year and has since appeared in Hyem at Northern Stage and Theatre 503 and Robert Icke’s Mary Stuart West End transfer. 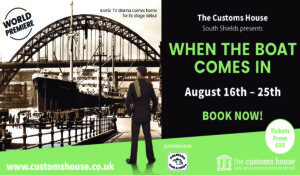 Director Katy Weir said: “I am over the moon with the cast we have in place for When the Boat Comes In. Such an iconic piece of work requires an incredibly strong cast to take on the challenge and I believe that is what we have. I can’t wait to get started.”

When the Boat Comes In was the first mainstream TV drama to be set in the north east and at its peak, attracted 15 million viewers and received national acclaim. It ran for four series between 1976 and 1981.

The play has been generously supported by Colmans of South Shields.

Ray Spencer, Executive Director of The Customs House, said: “We’re so excited for this show. Don’t miss the boat, book your tickets now!”