Renowned broadcaster and writer Stuart Maconie stopped off at The Customs House on Saturday (12th May) as part of his tour to promote his critically acclaimed book; Long Road from Jarrow. Before he graced the theatre stage in front of a packed house for what was a wonderful, humorous and moving show, Paul – from our marketing team – caught up with him to talk about his new project, urban myths, puns and playlists. 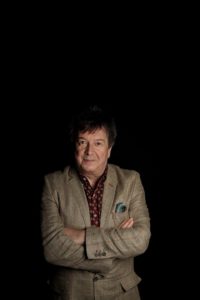 When did you first decide to write a book about the Jarrow march?
In the spring of 2016 when I realised that the 80th anniversary of this important part of working class history was approaching and no-one seemed to be making any kind of suss. So I thought I would.

Am I right in thinking that it arrived out of a blog post you’d written?
No, the blog was written ‘on the road’ as I walked the route to keep people in touch and to provide a way of making notes for myself.

Walking from Jarrow to London, retracing the steps of the 200 men is central to the books narrative, it’s certainly a heck of an undertaking walking 300 miles, was that your idea or did you take some convincing?
No, it was all my idea. I’m a keen walker; I’m president of the Ramblers. But it is not a pleasant or picturesque walk.

Is it correct that that the marches were flanked by several reporters and journalists from the newly launched BBC?
No. There were two embedded journalists from Fleet Street, and a couple of existing bits of film from Pathe News. They were however followed clandestinely by the Special Branch most of the way

Did you consider reviving this element of the march and dragging Mark Radcliffe along for the journey?
I get quite enough of that in another job.

The march has gone down in history as a monumental, romantic and almost mythical event, do you think they achieved anything?
The marchers thought not but some think that the memory of Jarrow seared into the collective memory led to the 45 Labour landslide and the Welfare State

The country has changed beyond recognition in 80 years, and yet, seems so similar politically and socially to the days of the Jarrow march, would you agree?
I don’t know. Industry has gone, technology has utterly changed us, the food is better, the people are the same mixed bag.

Being a music journalist, did you have a soundtrack for your journey?
I listened to a couple of things but I wanted to experience the trip, and not get run over by an articulated lorry.

Is it correct you came up with the urban myths about Bob Holness (playing the sax solo on Baker Street) and David Bowie (inventing Connect Four). Do you have any others you’d like to share with us?
Yes, (Pet Shop Boy) Neil Tennant is a fully qualified rugby league referee.

Your books usually have a great puntastic title – Pies and Prejudice is my favourite – which one are you most pleased with?
Cider With Roadies is by far the best. But I’ve knocked all that on the head now. I’ve gone serious.

Could you pick five records to be stuck on a desert island with?
Vaughan Williams – The Lark Ascending
Can – Bel-Air
Chic – I Want Your Love
Miles Davis – Bitches Brew
Gentle Giant – In A Glass Hair (it would be a different five tomorrow)

You’ve played in bands, worked at many of the UKs most influential music magazines, written fantastic (Northern themed) books, and currently work for the BBC and have become the Chairman of the Ramblers Society, you’ve certainly led a life unlimited, what do you think Stuart Maconie aged 7, the kid on the council estate, would have made of it all?
Funnily enough I’m going back to that council estate as part of the research for my next book. I’ll let you know. I think it might feel quite strange…

To keep up to date with the latest news, events and goings on at The Customs House, sign up for our weekly newsletter HERE