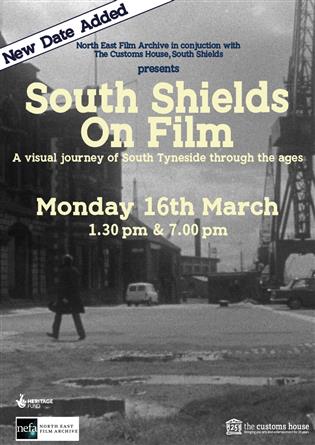 North East Film Archive visits The Customs House on Thursday 30th January for South Shields On Film, a new programme of historic film material of the area in days gone by.

The Customs House, celebrating its 25th anniversary as an arts & culture venue in 2019, is the perfect setting for a celebration of the history of South Shields and South Tyneside – given its own historic status: built in the 1860s and the beloved Grade II listed landmark was transformed into the venue we know and love in 1994.

South Shields On Film is presented by the curatorial team from the North East Film Archive, who will take viewers on a visual journey through the town’s history, exploring the lives of people who have lived, worked and made their mark on its rich cultural history – including a few familiar faces.

Highlights include films about Catherine Cookson ruminating on her Jarrow childhood, ‘When The Boat Comes In’ author James Mitchell reminiscing around town in a Tyne Tees documentary from the late 1960s, Mohammad Ali’s visit to South Shields in 1977 and films documenting the working lives of the shipbuilders at Palmers, Hebburn and textile workers at Barbour. The programme features films from the 1920s right through to the 1990s.

South Shields On Film is part of North East On Film, a project supported by the National Lottery Heritage Fund that has ensured the preservation and digitisation of archive footage from across our region and which has provided opportunities for the public to see and enjoy the archive film collections cared for in the Archive’s vaults.

Since the project started in 2018, the project has screened material at special events to almost 5,000 people across the entire north east, and to almost 3 million people online. The project ends in early 2020.