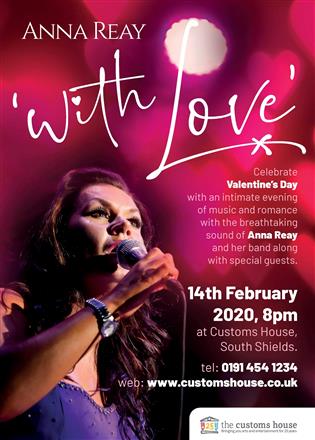 Celebrate Valentine’s Day with an intimate evening of music and romance with the breathtaking sound of Anna Reay and her band along with special guests.
With an enviable vocal range, engaging personality and inimitable humour, Anna Reay has travelled the world showcasing her unique talent.She is delighted to return to her native North East to bring her romantic show to the Customs House. A sell out show when last performed in the region at the Sage Gateshead in 2016, Anna will once again be joined by her band of talented musicians and some very special guests.
Expect to smile, laugh and cry as you are taken on romantic journey through classics by , Lady Gaga, Whitney Houston, Nina Simone, Eva Cassidy, Cilla Black, Stevie Wonder, Nat King Cole, Maria Callas, Katherine Jenkins, Peggy Lee and many more. The show also includes some show stopping numbers from Musicals such as ‘A Star is Born’, ‘The Greatest Swithhowman’, ‘Wicked’ and ‘Les Miserables’.
Anna has enjoyed extensive tours of the UK and Europe. Her sensational performances have included theatre shows, more intimate venues, sailing the seven seas as guest entertainer on luxury cruise liners and being invited to sing arias in front of thousands at football matches.
With a vast array of musical styles including soul, blues & jazz as well as musical theatre, classical and popular music, Anna has wowed critics nationally and internationally. She is delighted to return to the North East to perform her Valentine’s show ‘With Love’ at the The Customs House. Her other successful Theatre shows include ‘Great Ladies of Song’ and Anna Reay at Christmas.
Mark Ritchie from The Stage newspaper said:
‘This Newcastle upon Tyne-based vocalist feels the music and adapts her vocal talents to suit completely disparate styles of music. For example, I do not think that I have seen too many artists switch so effortlessly from the Ella Fitzgerald arrangement of Cheek to Cheek to a rendition of O Mio babbino Caro by Puccini.
In short, Reay is a performer to get truly excited about.
Her adopted strategy of chatting to her audience was most endearing. I liked everything about her. The biggest selling point here however was something you cannot train, coach or acquire by purchase. I’m referring of course to Reay’s sheer charm and stage presence.”
Anna Richardson, of the Informer Magazine described her as “a truly remarkable voice with a deceptively relaxed stage persona. The band are highly skilled musicians. Top marks all round” and fan Alan Shearer describes her voice as ‘truly lovely’.
Anna will be joined by her band Stu Hackney on drums, Deon Krishnan on bass, Steve Whitfield on keyboard, Nigel Murgatroid on guitar.