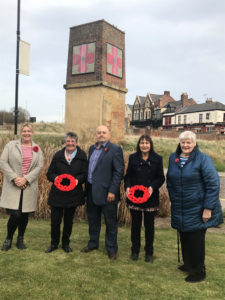 A touching tribute to the war dead to mark the 100th anniversary of the end of the First World War has been unveiled at The Customs House.

Volunteers from craft group The Materialistics have created four fabric poppies, which have been hung on the chimney stack opposite the building in Mill Dam, South Shields. The project was supported by The Customs House, South Tyneside Council, Bowmer and Kirkland and Ashley Timber.

Each framed poppy measures approximately 8ft x 8ft and various techniques have been used, including knitting, quilting and proggy, to create the flowers, a universal symbol of remembrance on Armistice Day.

This Remembrance Sunday, November 11, marks 100 years since the end of the Great War and The Customs House is hosting the borough’s Civic Remembrance Day Service, in which another poppy will be displayed on the stage.

Ray Spencer MBE, executive director of The Customs House, said: “I am delighted that we were able to work with The Materialistics once again. It has been far too long since their last project with The Customs House and it is great to welcome them back.

“The volunteers and local companies who have made this project possible should be commended. It is a fitting tribute to those who gave their yesterdays for our tomorrows. I am so proud of what they have done.”

The Materialistics are a group of knitters and stitchers, ranging from novices to experts, who enjoy practising skills in creative ways, using recycled materials whenever possible. The group formed in 2009, during the Coat for a Boat project commissioned by The Customs House, which was followed by several other successful projects and exhibitions, including Follow the Herring and A Grand Tour.

Their latest project has been a year in the making and approximately 600 small poppies have been created by over 20 members in that time, which have been ‘stitched to fit’ onto fabric to create the larger 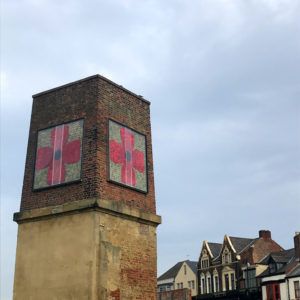 Group member Jean Thornton said: “It is amazing to see them in situ. It makes all the knitting of hundreds of poppies worthwhile!”

Fellow member Jenny Hunt added: “Our group members have different skills and they will all be working on different things and when it all comes together it is incredible.”

Another member, Mary Wilson, said: “The idea of using lots of different materials and broken up pieces of fabric chimed with the imagery of people and families who were broken and fragmented as a result of their wartime experiences.”

A limited number of tickets, priced £10, are still available for the Civic Remembrance Day Service, which starts at 1.30pm on Sunday, November 11.