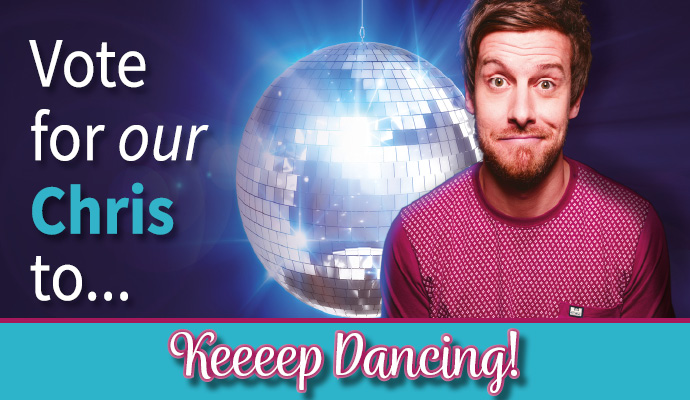 Comedian Chris Ramsey is a long-standing supporter of The Customs House – now it’s our turn to throw our weight behind him.The stand-up star is one of the 16 celebrities taking part in Strictly Come Dancing this year, with the live shows kicking off on BBC1 at 7pm on Saturday night.
He has been partnered with Karen Hauer, the show’s longest serving female pro, who has previously danced with Westlife’s Nicky Byrne, Hairy Biker Dave Myers, broadcaster Jeremy Vine and TV chef Simon Rimmer, among others. She reached the finals with former The Only Way is Essex star and TV presenter Mark Wright in 2014, finishing fourth overall, and made it to the quarter finals with actor Charles Venn last year – so no pressure Chris! We’ll be cheering him on all the way and we’re urging our customers and visitors to do the same, with posters and banners around the building, where South Shields lad Chris has performed on countless occasions.

We’ll be cheering him on all the way and we’re urging our customers and visitors to do the same, with posters and banners around the building, where South Shields lad Chris has performed on countless occasions.

Ray Spencer, Executive Director of The Customs House, said; “In our 25th year, we are delighted to support our Honorary Fellow, Chris ‘Twinkle Toes’ Ramsey, The King of The Nook, and we hope he rules Strictly in the way he rules the stand-up comedy scene.” 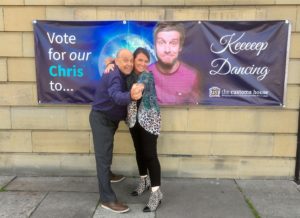 Chris was one of the first people to be inducted as an Honorary Fellow of The Customs House Academy in 2015, alongside fellow stand-up comedians Jason Cook and Sarah Millican, in recognition of their contribution to the arts and entertainment.
It has been revealed that Chris and Karen will be dancing the Cha Cha Cha as their opening number and Karen admits she’s “being a drill sergeant” in training, but Chris is “handling it really well”. Strictly Come Dancing runs until Christmas – but fans can get their fix at The Customs House in the new year, with two shows featuring stars past and present.

Dance to the Music, on Sunday, February 23, is created, directed and choreographed by former Strictly pro Kristina Rihanoff and hosted by X Factor and Dancing On ice winner Jake Quickenden. Tickets are priced from £27. Strictly pro Neil Jones, who will dance with England footballer Alex Scott in his first celebrity pairing this year, brings his Gingerland 2020 tour to The Customs House on Thursday, July 9.