Home News The cast to the Takeover Young Writer in Residence’s play has been announced.

The cast to the Takeover Young Writer in Residence’s play has been announced. 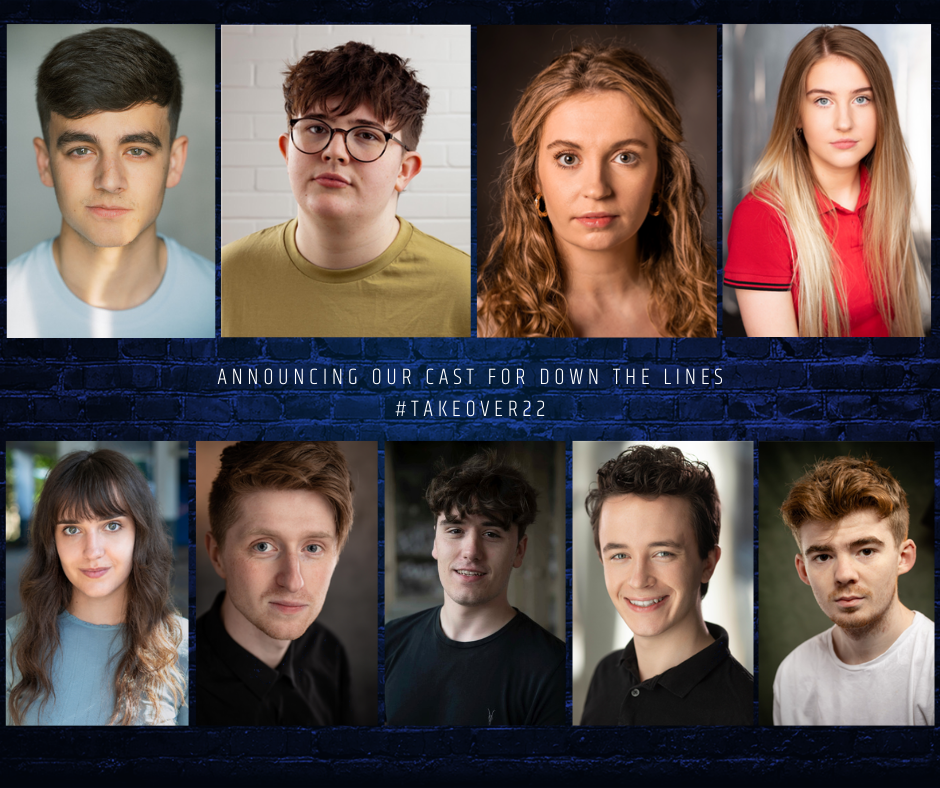 Down the Lines will be performed at The Customs House on the last night of Takeover 2022 on June 3 and again on Saturday 4 June.

The play – set in a secluded spot on a disused railway line, is to be directed by Chloe Jane Millar, and assisted by Kieron Jackson, both of whom starred in last year’s Young Writer’s play.

The Takeover Young Writer in Residence’s play gives emerging actors the opportunity to gain professional experience, and has become a hugely anticipated addition to the North East theatre scene, launching many young actors into professional careers.

Down the Lines is written by Owen Saunders, and it centres around a disjointed group of young people who all have something they’d like to escape from. The old lines become an unlikely site for these youngsters to confront these feelings (and each other) and help each other come to terms with their different, but always complicated, relationships to home. The North East serves both as the heart of the piece and it’s central problem. It is about finding the difference between where your home is and where you belong.

Taking on the role of Sean is Ben Gettins. He is a graduate from Newcastle Theatre Royal’s Project A; whilst training there he starred in Fear and Misery Of The Third Reich playing the role of Theo. This is his first time performing at The Customs House and he’s very excited to be working on this new play.

Benjamin Michael Smith is thrilled to be back at The Custom’s House. His recent stage credits include Josh in Cherryade Supernova and Jack Orben in Overdue. When he’s not acting, Benjamin works as a freelance filmmaker and is the frontman of North-East metal band Negatives. He will be playing the role of Deano.

Performing as Rob, is Jordan Mullen, who is currently training at South Tyneside College on the Performing Arts BTEC. He recently performed the role of Blister in Remote by Stef Smith (National Theatre Connections at The Customs House, and The Firestation, Sunderland). During his time at college, he has been part of a varied programme of performances, and is particularly interested in developing his practice with movement and dance. Jordan is delighted to be making his professional debut in his hometown at The Customs House.

Playing sisters Ana and Alicia, are Alrefya Bell and Sophie Mai. Alfreya has recently completed training at the Liverpool Institute for Performing Arts, and is excited to star in her first show at The Customs House. Prior to this, she has performed an original physical theatre piece at the Durham Fringe.  Sophie completed her actor training at Project A at Newcastle Theatre Royal, with more recent training being with the National Youth Theatre. Before this, she worked in two theatre company’s, putting on plays with themes around young people’s lives, and also company member’s original writing. Down the Lines will be both their debuts at The Customs House and are looking forward to working with the team.

In the part of Miles will be Jonathan Iceton, a recent graduate of the Acting Performance Masters course of Mountview, Jonathan originally studied Music at the University of Cambridge, where he took part in over 40 productions, including performances with the Marlowe Society and the Cambridge Footlights. Since completing his training, he has worked with Plus One, a theatre company working with care-experienced young people, and has just finished shooting his latest short film, A Place to Call Home. This is his Customs House debut.

Faye will be played by Elijah James, who is about to finish training at The Northern School of Art, and who has recently performed in Taking Showers in Lemonade. This is their first time performing at The Customs House. Prior to this, they have performed in Incense and Bleach, Super Happy Amazing Burger Time, Chasing ACEs and Kill the Boy.

The role of Charlie is Mitchell Wilson’s, who trained and studied at Northumbria University. This is his first time at The Customs House. He has starred in his self-written one-man show ‘It’s all Just Timing’ and has recently just finished filming for an upcoming short film down in Gloucestershire.

Rounding up the roles will be Nadine Blythman who completed her training at the Italia Conti Academy of Theatre Arts. She recently starred in Supreme Gentleman and performed as a principal role at Lapland UK. She is excited to return home for her first professional performance at The Customs House playing the role of Emma.

Down the Lines will be staged on June 3 and 4 at 7.30pm at The Customs House. Tickets are Pay What You Decide.

This work is possible due to the generous support of The Virgin Money Foundation #iwill Fund.