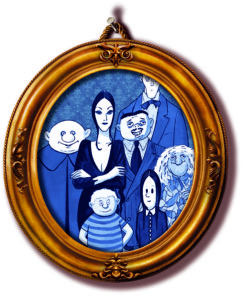 The Customs House is looking for creepy and kooky young actors to join its Summer School production of The Addams Family.

And if they’re mysterious and spooky too, all the better!

The Addams Family started as a cartoon series in The New Yorker. Penned by American cartoonist Charles Addams it ran from 1938 until his death in 1988. The macabre household has since been depicted on TV, in film and most recently, on Broadway and the West End in a new musical comedy.

The musical version will be adapted by The Customs House Summer School this year and applications to take part are now open.

Director Gareth Hunter said: “The Addams Family is a great show full of catchy tunes and comedy moments. People may not know the show, but they know the characters and the quality and talent that the Summer School has become known for.

“We are looking forward to seeing lots of familiar faces and hopefully new ones at the auditions.”

Featuring an original story, it sees Gomez do something he’s never done before – keep a secret from his wife. His daughter confides in him that she has fallen for a ‘normal’ boy and Gomez must keep schtum. So what happens when they invite his family over for dinner?

The Customs House Summer School is open to children aged eight to 21 and runs from Monday, July 23, to Sunday, August 12. The production will conclude with five performances over three days.

The project will be held at The Customs House, Mill Dam, South Shields, working between the hours of 10am and 5pm, with some weekends and additional rehearsals for principal roles. There is a participation fee, but some funded places are available.

To take part, download an application form HERE and return it with two passport-sized photographs no later than Monday, April 16.

All applicants will be invited to attend an audition on Sunday, April 22, from 10am to 5pm.