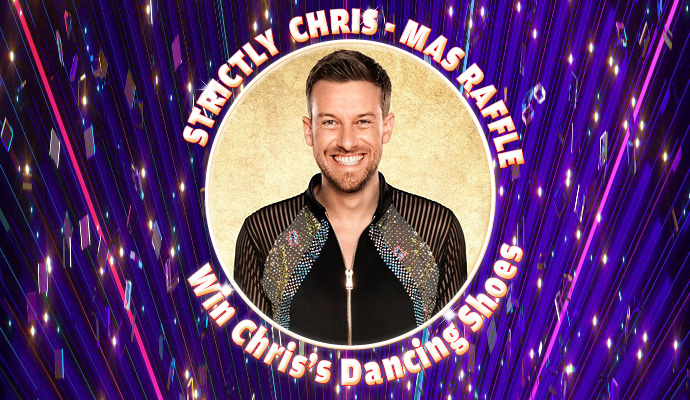 Comedian Chris Ramsey has donated part of his Strictly Come Dancing wardrobe to The Customs House to help raise funds for his hometown theatre.
A pair of dancing shoes, signed by the star, will be raffled off in aid of the ongoing Heart of the House Appeal, supporting The Customs House Trust in its 25th anniversary year.
Ramsey, an Honorary Fellow of The Customs House Academy, reached the semi-finals of the competition with his professional partner, Karen Hauer, despite never having danced a step before in his life. The pair became firm fan favourites, wowing the crowds – and the judges – with their couple’s choice commercial/street dance to Let’s Get Ready to Rhumble in Week 7 and their salsa to Uptown Funk at Blackpool in Week 9.

Ray Spencer, Executive Director of The Customs House, said: “Chris has already given us so much, entertaining us week after week during his amazing Strictly run, but now he’s giving us a boost of a different kind by helping us raise funds for the Heart of the House Appeal. We know there are plenty of fans who would love to get their hands on Chris ‘Twinkle Toes’ Ramsey’s dancing shoes, so why not enter the raffle, give to a great cause and hopefully you’ll waltz off with a piece of magical Strictly memorabilia.”

The Customs House has added to the raffle, with other prizes including a family cinema ticket, a pair of tickets to Jason Cook’s Comedy Club and afternoon tea for two in Dame Bella’s.

You can enter the raffle at The Customs House box office, either in person or by calling (0191) 454 1234. You can also text RAMSEY to 70085 and enter online at www.customshouse.co.uk. Each entry costs £5 and the raffle will be drawn on Christmas Eve.