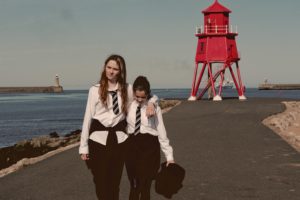 A film set in South Shields is coming home for its north east premiere.

Coming-of-age drama Bliss! will be shown for the first time in the region at The Customs House, in South Shields, on Friday, July 21, at 8pm.

Osei, who will be travelling up from London for the premiere, said: “I am really excited. I have got goosebumps, actually. It’s really nice to be coming back to the north east for the premiere.”

Bliss! is a striking, modern-day rites-of-passage adventure about a 16-year-old girl, Tasha Robson, who sets out on an emotional journey to find her father.

It features a strong local cast, including Chloe Cuskin, from South Shields, who is making her film debut playing Tasha’s younger sister, Debbie.

She was cast after taking part in workshops at The Customs House when the film was in the early stages of development.

Chloe said: “Debbie is a very innocent and sweet character and she’s really loyal to her sister. She always follows her around and takes a lot of life lessons from her as well.

“Working on my first feature film was obviously a very new experience, but it was all just a learning curve. On the first day of filming I was very nervous, but once I got past the first couple of days I started enjoying it.

“What made it so much better was having a good cast and crew. Everyone gets on so well, it just put me at ease and Rita is such a great director.”

Tasha is played by Freya Parks (Creation, Jane Eyre) and her elder sister, Jenny, is played by Lauren Johns (Pride, Here and Now).

Little Mix star Jade Thirlwall, from South Shields, had auditioned for the role of Jenny before her pop career took off and a signed copy of the group’s debut single, Cannonball, features as a prop in the film.

Natasha Haws, from South Shields, plays heavily-pregnant Dasa opposite Reece Noi (Game of Thrones, Grange Hill, Waterloo Road) as her baby’s father and Tasha’s brother, Danny. She was 15 when she first auditioned for the role.

She said: “It is my first film and Reece has been doing it since he started to walk, so he was very protective and very helpful in my journey through it, he was lovely. I was very on top of his accent. I was on top of everyone’s accents!”

This leads her on a journey to Norway, having been told by her older sister that she remembers a man referred to only as ‘The Viking’ coming round when she was a baby.

She is helped in her quest on the other side of the North Sea by Norwegian girl Marta, played by Elvira von der Lippe.

Kim Tserkezie, from Newcastle, who played Penny Pocket in children’s show Balamory and now runs her own TV production company, also has a small part in the film.

Ray Spencer, executive director of The Customs House, who himself has a small cameo role in the film, said: “We are delighted to be hosting the premiere.

“The film has been a long time in the making and to finally see it on the big screen in all its glory is a joy for everyone involved and I’m sure it will delight audiences.”

Sunderland singer-songwriter Martin Longstaff, aka The Lake Poets, performs his song, Vane Tempest, produced by Dave Stewart of The Eurythmics, in the film.

Bliss! is Osei’s feature directorial debut and is based on Writer’s Guild Award-winning Alex Ferguson’s play of the same name, which Osei’s Sugar & Water Films adapted for the screen with initial funding from Northern Film & Media.

She said: “It has been a long journey. The film has been many years in the making, a real labour of love and I am really happy with the result.

“The younger members of the cast became like children to me, mainly because I met them when they were so young. I knew they were the right people for this film, and I wanted to keep the cast together.”

Some scenes were filmed at Marsden Beach, Souter Lighthouse and The Groyne, as well as on location in Norway, with Rita saying: “It was wonderful to be able to show South Shields off for its beauty in the film.”

Tickets for The Customs House cinema are £6 for adults and £5 for concessions. To book click HERE