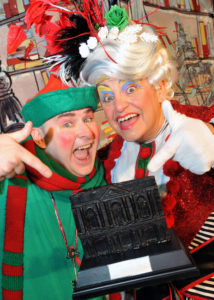 A special award was given to ‘Santa’s Naughty Elf’ Wayne Miller to mark the show’s 10-year anniversary.

Wayne, who stars as Elfuent the elf and directs the show known as ‘the little panto for little people’, said: “When we started Naughty Elf all those years ago, it was just a small show with a few shows, an experiment to cater for The Customs House’s younger audience members and their families. All these years on it’s become a runaway success that’s become a tradition for many North East families.

“I’m so grateful for Ray Spencer and The Customs House for giving a naughty elf a home. It’s been a decade of fun, fun that wouldn’t be possible without the continued support of our fantastic audiences.

“I’d never have dreamed Elfluent, Santa’s Naughty Elf would be celebrating 10 years in the workshop. Elfluent is truly honoured to have served Santa and the children for the past 10 years. A Naughty Elf that wants to say a big thank you to all!”

An inscription on the award – a coal sculpture of The Customs House – said: “Wayne Miller, 10 Years of Santa’s Naughty Elf, The Little Panto for Little People, December 2018.”

Ray, who is currently starring as Dame Bella in Beauty and the Beast, also at our venue, said: “I was delighted to be able to present Wayne with this very special award, marking Elfluent’s 10-year service to Santa Claus – and particularly thrilled it was on Panto Day.”

In its 10-year history more than 35,000 little ones have attended the show and this year will be its best year yet with more than 4,500 tickets being snapped up.

Aimed at under sevens, every year Elfluent gets in some sort of trouble having to race against time to help save Christmas and make sure Santa Claus can deliver all the presents in time for Christmas Day.

Santa’s Naughty Elf’s Celebration of Calamity runs until Monday, December 24. Performance times vary, and tickets are £10 and include a gift from Santa.

For further information or to book tickets, contact our Box Office on 0191 454 1234 or visit our website HERE.