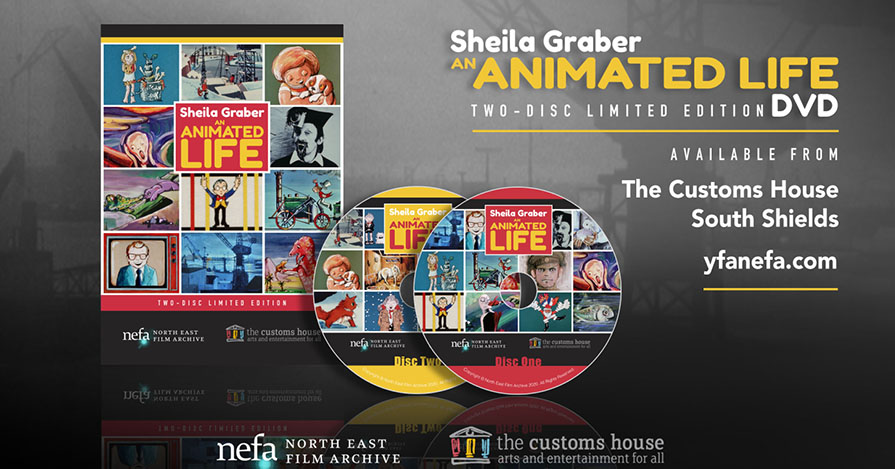 In the midst of the Covid-19 lockdown, North East Artist, Animator and Teacher Sheila Graber marked her 80th birthday. In celebration of Sheila’s birthday and illustrious career, the North East Film Archive, with The Customs House, South Shields have produced a limited edition two-disc DVD: Sheila Graber: An Animated Life.

From pastel to pixel, Sheila has produced over 100 films from her home-based studio covering a wide range of subjects. In 2012 the North East Film Archive, were privileged to acquire this internationally significant animation collection. Mainly shot on 16mm and 8mm cine film, the footage is a fascinating window onto Sheila’s animated legacy. In this special production Sheila Graber: An Animated Life, Sheila takes us through some of the best of her animations over the decades, the two DVD’s are carefully curated into four key sections: Northern Roots, Art History, Animals and Nature and a lifelong love and inspiration – Cats.

Sheila Graber was born in South Shields Tyne & Wear in 1940. Trained in Fine Art and Education she began animating “just for fun” in 1970. Ten years later the hobby turned into profession as she gave up her post as Head of Creative Studies at a large comprehensive school to pursue animation full time. The North East of England and South Shields in particularly, is in Sheila’s soul and was the inspiration for her early work. My River Tyne is one of several animations that draw on her Geordie background. An eclectic mix of documentary footage, photographs and original artwork combine to tell a stirring story of the River Tyne, Sheila weaves together industrial history with fragments from a childhood as the daughter of a Tyne Pilot Master.

“I guess I’ve been lucky to have had a very animated life, drawing, painting, teaching, travelling and of course animating. I’m delighted to have collaborated with the North East Film Archive in my 80th year to create this DVD. Learn more about the techniques and the subjects that have caught my eye over the years, and by purchasing the DVD you’re helping to support two charities that are close to my heart”
Sheila Graber

Sheila’s Northern Roots also include the quick-fire cartoon day in the life of the BBC Look North TV news team with a starring role for the genial Geordie presenter Mike Neville. You can learn how to speak the local North East lingo with a riotous animation of Scott Dobson’s popular vernacular lessons in Larn Yersel Geordie or chart the history of women’s revolutionary road to freedom in the North East – from Stone Age sister to suffragette in Howay the Lasses. Sheila has a love of art in all it’s forms and the DVD explores Art History through some creative and expressive animations. Face to Face is like a human time machine, a performance in pastel, screened at the London Film Festival in 1983 and winner of the BBC Best Animation Award in 1984. Mondrian, about the Dutch painter Piet Mondrian was screened at the Tate Gallery, the Open University and BBC’s children’s television series Blue Peter and is still on display in Mondrian’s own house in the Netherlands.

The first DVD of the two-disc limited edition offering also includes a plasticine stop-motion animation Dance Macabre, inspired by Bill Tytla’s Devil Sequence in Fantasia. You can also get festive with a highly imaginative cut out animation, 12 days of Christmas inspired by her own designs for Christmas decorations on the walls of the comprehensive school where she taught for many years. The second DVD brings to life Sheila’s love of animals and especially cats. Opening with an experiment in the use of hand-inked and painted cells The Boy and the Cat, Sheila’s first short animated film for children, follows mischievous characters, modelled on her nephew and pet cat, Whitey, with the action taking place in the shadow of the docks in South Shields. The cat Whitey returns in The Boy and The Song with a cartoon boy soprano and his cat weather the storms prompted by the wintry words of traditional Celtic and Northumbrian folk songs and a Christmas carol.

“We are delighted to work with the North East Film Archive to produce this DVD. Sheila is an icon of animation and for more than half a century has been enthralling people with glorious storytelling in her own unique style. Its right her work should now be available in this definitive collection to a whole new audience.”
Ray Spencer MBE, Executive Director, The Customs House

The DVD is packed with entertaining animations that will interest people of any age, understand some of the animation techniques and be inspired to get creative wherever you are in the world with this limited edition two disc DVD celebrating 80 years of the much-loved Sheila Graber.

“Sheila Graber’s animations are a highlight of the North East Film Archive collections, we are delighted to have produced this DVD so audiences across the world can take a glimpse inside the creative mind of this truly inspirational and talented woman, a pioneer in her field but very much down to earth, it’s no wonder she was presented with a Lifetime Achievement Award by the Royal Television Society. Grab a copy of the DVD, you won’t be disappointed.”
Graham Relton, Archive Manager, North East Film Archive

All proceeds from the sale of the DVD will support the charitable work of The Customs House, South Shields and North East Film Archive, so by popping a Sheila Graber: An Animated Life DVD in someone’s Christmas stocking, you are helping to save the film heritage of the North East and keep a treasured South Shields Arts venue afloat in these difficult times.

Welcome to issue 4 of Spotlight, our very own...
Read more

Welcome to Spotlight Issue 3, our very own e-magazine...
Read more