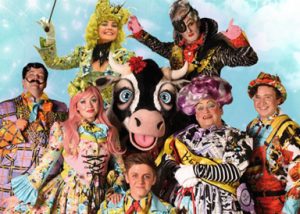 The show was co-written by Customs House Executive Director Ray Spencer MBE, who also starred in and directed the panto. Long-time collaborator Graeme Thompson, Pro-Vice Chancellor at the University of Sunderland, was Ray’s co-writer.

“It’s hugely gratifying and humbling to think so many people chose to make our little panto with the big heart to be part of their festive celebrations,” said Ray.

“We never take our audience for granted and this year’s cast worked especially hard to ensure those who put their trust in us were rewarded with a couple of hours of pure fun. I’d like to thank my fellow cast members, the wider Customs House team, our generous sponsors, and our audiences for making Jack and the Beanstalk a very special and memorable show.”

For the seventh consecutive year, the show’s set and costumes were designed by Paul Shriek and Matt Fox.

Ray is already planning this year’s panto, The Lambton Worm: “It’s the 150th anniversary of the famous song, which was actually written for a panto. It was also the first panto performed here at The Customs House, so the time was right for us to do it again.

“The Lambton Worm legend is a great story and one that lends itself to a panto. I’m very grateful to Hays Travel, who very generously have once again agreed to be our main sponsor.”

More than 3,000 tickets have already been sold for the show, which will start on November 28. Tickets are available from the box office on 0191 454 1234 or by visiting The Lambton Worm page.