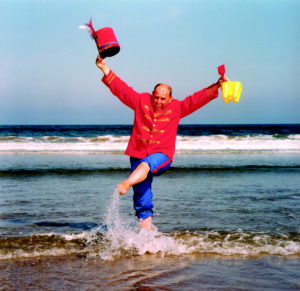 Ray ‘Tommy the Trumpeter’ Spencer celebrated his 60th birthday in style this weekend – and raised thousands for The Customs House Trust.

The Customs House Executive Director turns 60 tomorrow and his contemporaries and those he has taken under his wing over the years came together on the venue’s stage to give a bit of a fanfare to the occasion.

The dad of four was pulled up on stage by compere for the evening and BBC Look North’s Jeff Brown in a ‘This is your Life’ style show on Sunday.

With surprises and messages throughout the night, the showcase celebrated Ray’s life from him first treading the boards at school, his years with the Westovians, lecturing at South Tyneside College, his 25 years as children’s entertainer Tommy the Trumpeter, his time at The Customs House (including writing, directing and starring in its annual pantomime) and his very own musical family.

And Sunday’s show raised almost £7,000 for The Customs House Trust which provides art and cultural activities for the people of South Tyneside.

Ray said: “I consider myself a very lucky man to have a fantastic family and great friends who were able to be with me to celebrate a special birthday and in doing so raise money to continue the work we do with some of the most vulnerable people in South Tyneside.

“I wish I could have shook the hand of everyone in the audience who were royally entertained by a spectacular cast.”

Ray was treated to two songs specially written for him by daughters Natasha and Georgina, with Georgina’s being performed by the whole family including Ray’s partner Trish, youngest daughter Melissa and son James.

The event also celebrated the venue’s in house productions and in particular those created between Ray, writer Tom Kelly and Music hit-maker John Miles. John performed songs from Tom & Catherine and the most recent Customs House production, The Dolly Mixtures. Most of the original cast also returned to perform Making a Difference from The Dolly Mixtures.

The final surprise of the night was an appearance by Ray’s long-time stage partner Bob Stott. Bob regaled stories from the past including some from their 37 years performing in panto before presenting Ray with a cake, featuring Tommy and his new guise as dame.

Ray, who was awarded an MBE in 2010 for services to the arts and an honorary degree at The University of Sunderland in 2012, has been at the helm of The Customs House for 17 years.