Geet Big Googly Eyes Thanks to The Pyrus Trust #MyArtsAward

Arts Award is a fantastically flexible which means every child can enjoy and achieve. Since 2013, The Learning and Participation Team at The Customs House have worked with foster carers as well as fostering and education staff to help foster children in South Tyneside achieve their Arts Award. Originally this was part of Trinity College’s Reaching Out programme to engage more children who are harder to reach. You can find out more about the original pilot here. Our partners include The PLACE (South Tyneside’s Virtual School for Looked After Children), the children’s carers and South Tyneside Fostering Services.

In late 2017, The Pyrus Trust got in touch to find out about our work with The Treasure Group.  The Pyrus Trust gives money to help children in care to take part in arts projects. After answering the trust’s questions, The Pyrus Trust gave The Learning and Participation Team a grant. This funding was used to run a project before Christmas. The project was led by North East based designer Alizon Bennet.

“We have a successful record of working with Looked After Children.  The Treasure Group have enjoyed working with lots of wonderful creative people in 2017.  The Pyrus Trust are enabling more South Tyneside children to enjoy an inspirational, creative learning experience. We are delighted they are supporting this work. Put simply, it wouldn’t be possible without their backing.”

Working with a Professional Designer

Children considered, “What does the Lambton Worm look like?” reading the folk tale’s words they concluded the only facts were the worm had ‘Geet big googly eyes’ and must have been huge to wrap itself around a hill. The group thought it may look like a worm, fish, serpent or dragon. Some suggested the worm might look ‘friendly’ to lure children closer or like a farm animal to get close to the cows/sheep. The children collaged features from creatures together creating imaginative designs.

This session developed children’s ability to read and analyse text. It helped them to hypothesise and encourages their imaginative thinking skills. The children’s collages demonstrated their ability to create a range of design ideas. Children quickly established positive learning relationships with each other, Alizon and Elizabeth. 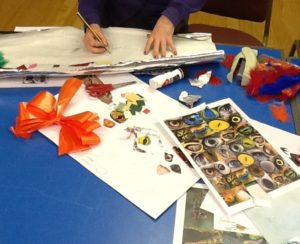 In week two, they explored how to fix materials together using sewing, weaving and other fixtures like cable ties and loom bands. We used a wide range of materials including cotton fabric, nylon netting, embroidery threads, buttons and other embellishments. The children had a limited amount of experience working in textiles.

Children developed their manual dexterity, problem solving and reinforced their creative thinking skills. There was evidence of teamwork as group members helped each other realise their ideas. One young artist said, “I’ve done sewing before with the Girls Brigade. We did a picture of the nativity but nothing like this before.”

In the third week, children researched designer Alizon. They asked Alizon questions and recorded a summary of what she shared. Children also looked at examples Alizon’s work. They handled samples of fabric that had been beaded, ripped, plaited, fringed, layered and embellished. 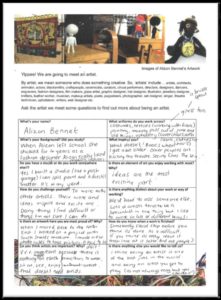 This process of summarising what Alizon said was challenging. It was a useful exercise developing children’s communication skills as they had to recap what they recorded checking they had covered Alizon’s key points.  Next children played with examples of strung, stick and sock puppets made by Alizon. They then began constructing their own Lambton Worm puppets.

In week four, after a busy session most of the group completed their puppets. We reviewed how they could be even better and made any adaptions. The process of asking children to review their own designs develops their critical thinking skills, perseverance and levels of aspiration.  Our share event concluded the project and was really enjoyable. The children bringing their puppets to life. They were also able to talk about the skills they had acquired with their foster carers.

In week four, after a busy session most of the group completed their puppets. We reviewed how they could be even better and made any adaptions. The process of asking children to review their own develops their critical thinking skills, perseverance and levels of aspiration.

Our share event concluded the project and was really enjoyable. The children bringing their puppets to life. They were also able to talk about the skills they had acquired with their foster carers.

There were some lessons to be learned from this project for future activity with The Treasure Group. The Customs House initially aimed to complete an Explore Arts Award however attendance was more challenging than on previous projects. Many of the children had access time with family members, meetings with other professionals and other commitments linked to Christmas. We probably wouldn’t run a project like this so close to Christmas again.

The children really enjoyed working with textiles. There is definitely scope to work in this medium again. Working with such an experienced designer and arts-educator was really inspiring for the young people. Focusing on design and craft encouraged the children to really focus and they were motivated to complete the puppets developing mastery of assorted textile skills. Craft created a noticeably more relaxed environment. It was very calming.

One thing that we did notice different about this project was that fewer boys took part. We had hoped the monstrous nature of the Lambton Worm would inspire boys. There are still people who view certain artforms as being more appealing to boys and girls or men and women. That’s not something we try to promote at The Customs House, not only is ‘Arts Award for All’ but all artforms can be enjoyed by all. It’s something to think about in terms of future messaging to foster carers.

Be sure to search twitter for #MyArtsAward to find out more and visit Culture Bridge North East news section for more news. The Learning and Participation Team will also be tweeting more about Arts Award this week from @CustomsHouseLP  Got something to share about Arts Award? Join in the conversation.