The Customs House, South Tyneside Libraries and The Shields Gazette are proud to present The Terry Kelly Poetry Prize, a poetry competition that celebrates the life of local writer Terry Kelly by encouraging people up to the age of 25 to write their own poems. The competition is being held as part of The Takeover 2017, The Customs House’s festival for emerging artists and arts professionals.

The Terry Kelly Poetry Prize will be judged by professional poets, including local playwright and poet Tom Kelly, along with representatives of the three partner organisations. Shortlisted entrants will have their poems published in an anthology, which will be distributed during the Takeover and at The Word’s WRITE Festival, so the competition is an excellent way to see your writing in print and have it read by a wide audience.

The winners of the competition will be revealed at an awards ceremony held at The Customs House at 7pm on Wednesday 31st May; winners will receive a cash prize and framed certificate, and there will be special prizes for the educational establishments of the winners. The ceremony will also include poetry readings and special guests.

Poems can be on any theme and be of any length, and only one poem per entrant should be submitted. There are three awards categories: 11 years and under, 12 to 16 years and 17 to 25 years old.

All entries should be sent as a Word document to daniel@customshouse.co.uk, and should include the name and age of the entrant, the broad area in which they live, and their school or educational establishment if relevant. The deadline for entries is Sunday 14th May at midnight.

The Terry Kelly Poetry Prize is supported by The Barbour Foundation. 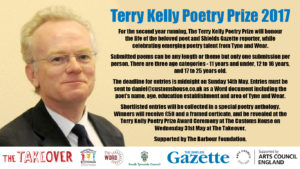