Panto stars get ready for The Great North Run

Panto stars, staff and supporters of The Customs House are gearing up for the Great North Run this weekend. Sixteen people are taking part in the world’s greatest half-marathon to raise money for The Customs House Trust, the charity behind the arts venue, in its 25th year. They include Executive Director Ray Spencer, who will be running in full panto costume as his alter-ego, Dame Bella Ballcock. 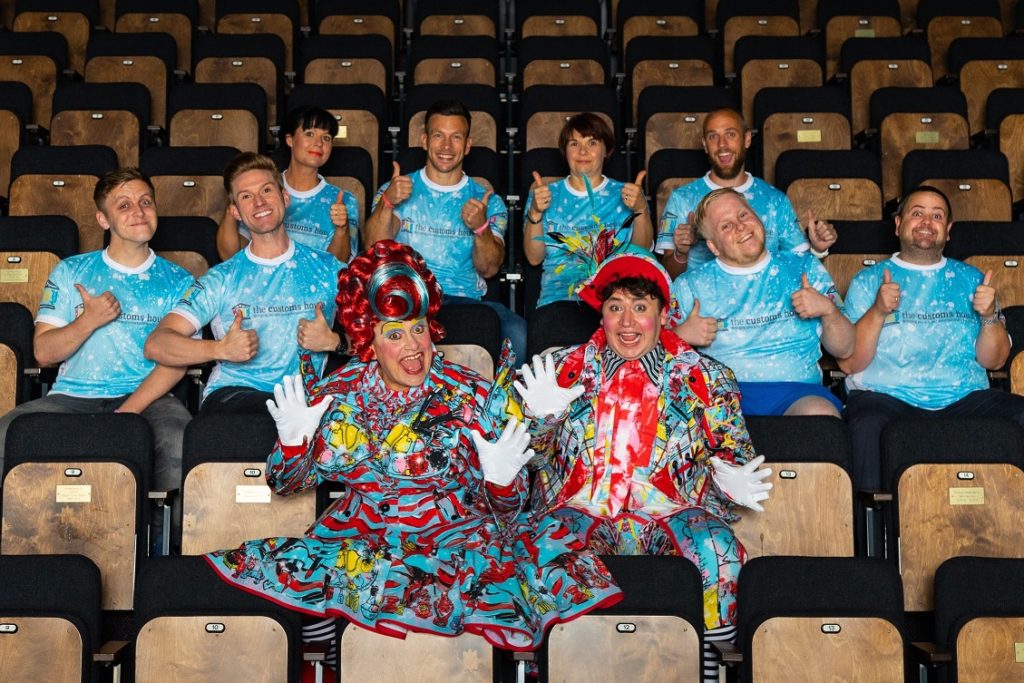 Actor Davey Hopper, who has been training for the event with Lee Tiffin, of South Shields-based Black Sheep Fitness Academy, will also be donning his Arbuthonot outfit and Lee, who alone has raised over £1,000, will be running alongside him. The rest of the team will be running in T-shirts sponsored by South Shields-based chemicals company, SafeSol Ltd.  They include actors Steven Lee Hamilton, who starred in last year’s pantomime, Beauty and the Beast, Luke Maddison and Kylie Ann Ford, who are also regulars on The Customs House stage, and Jake Smith, who directed Worm Town at The Customs House last year. Darren Hymers, a members of the Board of Trustees, is also running, as is box office assistant Mitchell Robinson. Several members of the public also signed up to take part. They are: Brandon Lee Evitt, Jonathan Carter, Mark Hodgson, Helen Charlton, Nicola Farell, Simon Walker and Ed Townend.
Ray said: “We wanted to mark our 25th anniversary in different ways, one of which is to take part in the world’s most iconic half marathon which, like The Customs House, runs right through the heart of our community.
“So thank you to those who have sponsored us, thank you to all of the runners and thank you in anticipation to all of the tens of thousands of people that will will us on to the finish.” The Great North Run is a 13.1-mile route from Newcastle to South Shields and this year’s event takes place on Sunday, September 8.

Each person running on behalf of The Customs House was asked to raise at least £250 in sponsorship. You can add to their tally by visiting www.virginmoneygiving.com and searching for The Customs House Trust Ltd or individual runners.

SafeSol Ltd specialise in Huwa-San disinfectants which are used for Legionella control in water systems. They also have their own pet range which includes SweetPee, stain and odour eliminator and Gumdrops, a pet dental hygiene water additive.

Step Into The Spotlight This Friday…

In this issue, we’ll give you the latest info...
Read more

Time flies…it seems only five minutes ago we were...
Read more