Jack and the Beanstalk is Set to be a GIANT Success 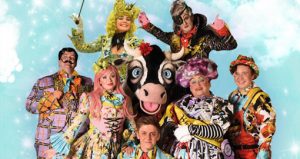 This year’s Customs House pantomime is sure to be a BIG hit!

The cast for Jack and the Beanstalk at The Customs House has been unveiled and they look fantastic.

More than 20,000 pantomime fans have already snapped up tickets to see the show, running from November 29 to January 7.

Customs House Executive Director Ray Spencer MBE, is once again starring in, directing and co-writing the show with Graeme Thompson, said: “We can’t wait to bring Jack and the Beanstalk to life at The Customs House. It’s not the first time we’ve done Jack so we’re excited to bring it back BIGGER and better than ever.

“Jack and the Beanstalk is a traditional pantomime and it’s clear to see people are eager to see what we’ll bring to this production – it’s bound to continue to grow in its success.

This year’s production will star Ray – who many will know as his former alter ego Tommy the Trumpeter – as Dame and panto regulars Luke Maddison as Jack and Steven Lee Hamilton as baddie Fleshcreep.

Also back as part of The Customs House panto family are Natasha Haws, as principal girl, and Gareth Hunter playing her dad The Mayor.

Newcomers to the annual festive show include David John Hopper as the Dame’s madcap son, Arbuthnot, and Geordie The Musical’s Eleanor Chaganis as the Fairy.

“I can’t wait to play Jack,” said Luke. “I am absolutely thrilled to be invited back to perform at The Customs House for the fifth year in a row.

“There really is something special about The Customs House at Christmas and I wouldn’t want to be anywhere else. Being able to play Jack in Jack and the Beanstalk is something I’ve always thought would be a fantastic opportunity and I am really grateful to have been given my first principal boy role alongside a super talented cast. It’s going to be an exciting time.”

More than 25,000 people came to see Alice in Wonderland last year and it’s hoped that Jack and the Beanstalk can build on that success.

Ray added: “Both the critics and the audience loved Alice so much last year that we have a lot to live up to this year, but we have a fantastic cast, stunning costumes and set design, plus some added extra magical touches, which means we know it’s going to be huge!”

Paul Shriek, who works alongside Matt Fox to create the costumes and set, said: “Through pantomine at The Customs House we invite the audience to ‘embrace the moment’, forget the ‘real’ world and journey with us to a land where they can escape into the fairytale being told.

“Together with Matt I am always thrilled to be asked to realise a new vision of ‘Cooksonville’ where the whole family can set off on a special, magical adventure.

“This year, our seventh year, we are climbing into the clouds to discover the story of Jack and the Beanstalk and hope that everyone will be once again be transported to the unique world we create.”