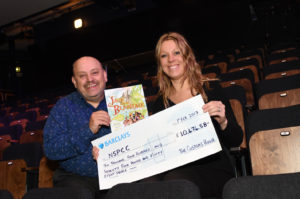 Panto fans have raised more than £10,000 for a children’s charity.

The Customs House was thrilled to hand over the cheque to NSPCC representatives for funds collected during the pantomime season.

Every year The Customs House, which is itself a charitable trust, raise funds for a chosen cause – and this is the most amount of money raised to date. This year bosses at the theatre chose the NSPCC as the charity was celebrating its 30th year of running its children’s counselling service, Childline.

Customs House Executive Director Ray Spencer MBE, who also writes, directs and stars in the annual pantomime, said: “Every year we are just astonished by people’s generosity and our audience always dig deep to raise an impressive amount.

“We always like to support a children’s charity and we hope the money raised at Jack and the Beanstalk means there is always someone at the other end of the phone to help those who call Childline.”

Wendy Bates, NSPCC fundraising regional head of North, said: “I’d like to say a big thank you to the all the team at Custom House for supporting the NSPCC. Your generous donation of a whopping £10,000 will help the NSPCC reach more vulnerable children when they need us the most, in schools, over the phone and in our therapeutic service centres.

“It is only with the continued support and generosity of the public that allows us to be there for millions of children across the UK, and to fight for every childhood.”

The theatre are currently choosing next year’s charity which will benefit from people attending The Lambton Worm, sponsored by Hays Travel. Tickets start from £9.99 and are available from the box office on 0191 454 1234 or by visiting The Lambton Worm page.