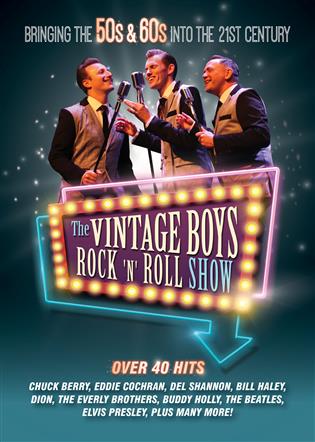 Step back in time to the Golden Age of Rock ‘n’ Roll as the sounds of the 50s & 60s are authentically recreated by The Vintage Boys.

With immaculate 3-part harmony, slick choreography, sharp suits and the backing of an incredible live band, the boys perfectly capture the look and sound of the golden era and will have you singing along and dancing in the aisles with their high-energy performance.

Featuring over 40 hits from stars of the 50s and 60s including Chuck Berry, Eddie Cochran, Del Shannon, Bill Haley, Dion, The Everly Brothers, Buddy Holly, The Beatles, Elvis Presley, and many more!

The show also features a little taste of what today’s music would sound like in the 50s & 60s as the boys put their unique ‘Vintage’ twist on some modern day pop hits.

Between them the boys have performed in theatres and concert halls worldwide, including Her Majesty’s Theatre and The Royal Albert Hall as well as performing roles in Jersey Boys and We Will Rock You. Their impressive vocal ability is matched by their energetic showmanship and infectious sense of fun.