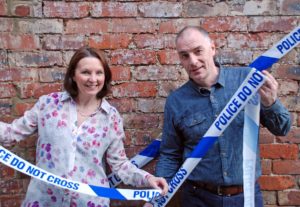 A FOUR-legged newshound will be one of the stars of a comic murder mystery making its debut at The Customs House next month.

Five Dead No Bodies has been co-written by Susan Wear and Rob Lawson and will be performed here in February.

Susan was nominated for North East Writer of the Year for her play The Duke in the Cupboard, which was popular with Customs House audiences in October 2015. Rob was an evening newspaper editor for 16 years, editing both the Shields Gazette and the Sunderland Echo.

Their play is about the fictional evening newspaper The Tyneside Times, which is struggling to retain its circulation and relevancy in the era of social media. The editor is passionate about the vital role local newspapers play in communities and will do almost anything to keep the paper afloat.

“The editor believes in good old-fashioned, honest news reporting and as the new fast-moving digital media blurs the line between fact and fiction, it drives him mad,” said Susan, who was a journalist for 12 years and is currently Director of Corporate Affairs at the Port of Tyne.

“Not only is his newspaper dying, but nobody seems to care about the truth any more as the Internet takes over. The play reminds us that we really are in danger of losing our local newspapers, and we won’t know what we’ve lost until they’re gone.

“But there is also plenty of humour as the characters of the newsroom and the local community –  including a very friendly dog – work their way through a series of mysterious happenings in the town.”

Rob, who left the Sunderland Echo in 2012, said: “Local papers have been at the heart of communities for generations, and although they may not be seen in the same way that they once were, they still play an important role in calling people and companies to account – and they can still serve as community champions.

“The role of an Editor changed hugely between me starting to edit the Gazette in 1997 and leaving the Echo in 2012, and I know things have moved on again since then. Social media has changed the landscape for papers, but the news they produce and the questions they ask are as relevant now as they were generations ago, no matter what channels the news is delivered by.

“Young reporters coming into the profession now need far more skills than I did when I started in the late 1980s, and we try to reflect the changing nature of newsrooms through the characters in the play. We’ve approached the drama in a light-hearted and fun way and we hope audiences enjoy what we’ve produced.”

Five Dead No Bodies will be directed by Scott Young, who is an Artistic Director at OddManOut Theatre Company.

The play will run from Wednesday, February 15 to Saturday, February 18. Tickets are available priced £18, £15 Concession/Friends, from the box office on 0191 454 1234 or by visiting the Five Dead No Bodies page HERE