Magic Show Makes A Spellbinding Return To The Customs House 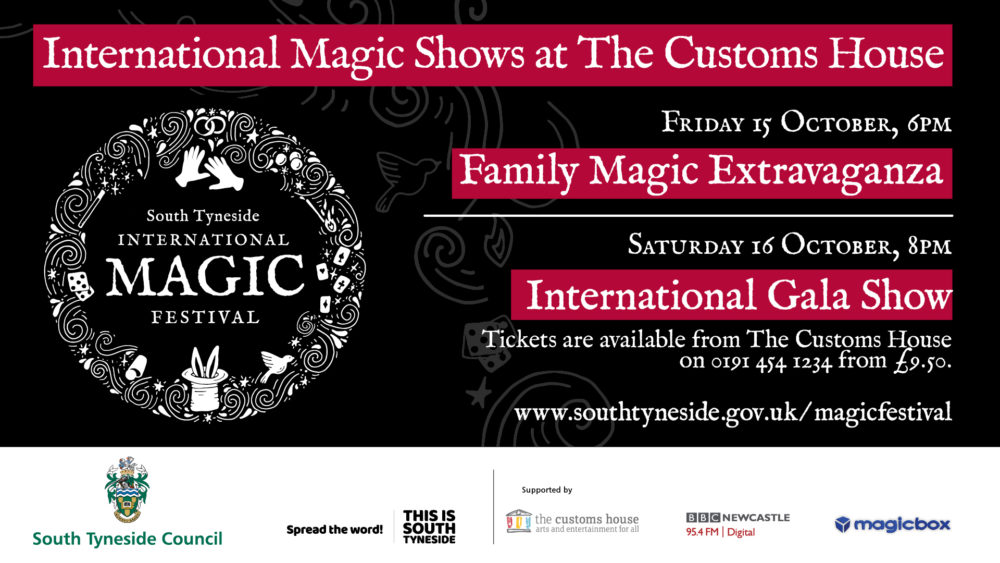 Some of the industry’s top magicians are set to head to South Shields for the Borough’s 17th Magic Festival, with two shows taking place at The Customs House, on Friday 15 and Saturday 16 October.

On the first evening, magic fans of all ages will get the opportunity to enjoy the special Family Magic Extravaganza, starting at 6pm and featuring a variety of entertainers, including festival favourites as well as some new acts, including Britain’s Got Talent stars.

The Saturday evening will see audiences left mystified and amazed once again when world class magicians, illusionists and mentalists, take to the stage for the Gala Show, at 8pm.

Councillor Joan Atkinson, Deputy Leader of South Tyneside Council with responsibility for Culture and Leisure, said: “South Tyneside International Magic Festival is one of the most unique and awe-inspiring events in the region’s calendar. It is always extremely popular with magic fans old and new, and this year is set to be no different as it showcases ten incredibly talented performers from across the UK’s magic industry.

“The festival gives us a chance to bring together magic professionals and the public for two spectacular evenings, with audiences able to see tricks and illusions performed live without the prospect of clever editing or computer-generated special effects.

“The Family Magic Extravaganza in particular is guaranteed to be a fun-filled night out for the entire family. We are sure all those who come along to the shows will be thoroughly entertained by the eclectic mix of magic, illusion and comedy.”

Joining the two-hour Family Magic Extravaganza is musician turned world renowned illusionist and sleight of hand magician Maddox Dixon. From opening stadiums for Coldplay to wowing judges on Britain’s Got Talent, Maddox is now gearing up to mesmerise South Tyneside audiences with his Rubik’s Cube wizardry.

Father and son duo act and BGT 2020 finalists, James and Dylan Piper will also take to the stage, warming hearts and blowing minds with their unique style of magic.

Audiences can also enjoy an exciting jam-packed visual performance from High Jinx as well as lots of craziness, magic, mayhem and silly songs from the UK’s Family Entertainer winner of 2018, Nutty Noah. Award-winning magician Graeme Shaw, a Magic Festival favourite and member of Newcastle Magic Circle, will compere the show.

The Saturday evening will see a new line-up take to the stage for the spectacular Gala Show.

Among those to appear is multi award-winning magician, mind reader and funny man Dave Loosley who has travelled the world performing his modern-day magic in his unique and funny way. Tom Crosbie, AKA the Performing Nerd, is also set to impress with an entertaining routine that combines his surprising skills, amazing memory, rapid mathematics and flair for comedy.

Tickets for the Family Magic Extravaganza and International Gala shows are available now from The Customs House on (0191) 454 1234 or www.customshouse.co.uk, with prices starting from £9.50 for the FME and £15 for the Gala Show.

Read All About It! Spotlight 46 Is Live

In Spotlight issue 46, we catch up with actor...
Read more