Ahead of the Love Songs performance on Monday, we caught up with Jonathan Cash from Baby Love Productions to learn a little bit more about the play.

Hi Jonathan, could you tell me a little about your background?
I’m the youngest of 7 children and I was born and raised in Lytham St Anne’s. Right next door to Blackpool. Along with the day job and raising us all, my mother was a singer in the Blackpool clubs under the fabulous pseudonym of Barbara Gold. She had a glorious soprano voice. My dad worked for the Gas Board and they were both keen performers in amateur operatic societies.

You’re from Lancashire, how did you end up in the North East?
I moved up here in 1994 with the day job. I worked in the civil service and visiting “The Ministry”, as it is still known locally, in Longbenton I got to know the North East and fell in love with it. I went to see a show at the Theatre Royal in Newcastle and decided I needed to get on that stage, which I did in 1995 in Paint Your Wagon, a show I also recently directed at the Tyne Theatre.

What’s the story behind Love Songs?
Vicki and Gary are singers in a 60s Tribute Tour. They are attracted to each other but they are both escaping from the past. Vicki has an abusive ex-boyfriend, who is still looking for her. Gary has an oppressive and manipulative mother. As they sing the classic songs and mix with the quirky and comical characters that are on the tour with them, they have to face their demons to see if they can build a future together.

There are some really classic 60s tracks featured in the play, how did you select which tracks were used? 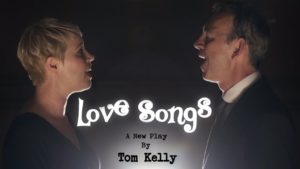 Tom Kelly chose all the songs. He wrote the play for us and he knows Helen’s and my voices very well. The songs are chosen to point up and sometimes contrast with the action of the play but also because they are truly great, timeless songs.

Do you have a favourite?
That’s a tough call. I love doing 24 Hours From Tulsa in Gene Pitney style and channelling Elvis to sing Love Me Tender, but Bridge Over Troubled Water is one of my favourite songs of all time so I’d probably choose that. Then again, Helen’s version of Somewhere gives me goose bumps.

Were there any songs that didn’t make it?
No, the songs that are in now were there from the first draft of the script. Tom’s instincts were spot on, as always.

How did you meet Tom Kelly?
It’s the strangest coincidence really. We happened to move in next door to Tom and his wife Linda in 2006. I knew of some of Tom’s work, for instance Tom and Catherine, but I only slowly became aware of the fantastic catalogue of work he’s produced. We’d been friends for some time and Tom knew we wanted to take a play out so he offered us Baby Love and the rest, as they say, is history. 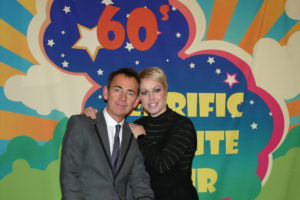 How did you select the actors?
That was easy. It’s Helen and me. She’s the best singing actress I know, bar none, and Tom wrote Love Songs for us so there was only one possible cast. It also does make rehearsing a whole lot easier. We just turn our dining room into a rehearsal studio and off we go.

As a teacher, actor and director, your work allows you to wear multiple hats (so to speak), do you have a discipline that you enjoy most?
Absolutely! Whilst, I do get satisfaction from doing a range of things, the greatest joy still comes from performing. Nothing beats making that connection with an audience and taking them on a journey with you. That’s why I’m so looking forward to Love Songs. Tom’s work has a tremendous power to emotionally engage an audience and the great songs will work their magic as they have been doing for 50 years.

Thanks for talking with us and we wish you every success with Love Songs.