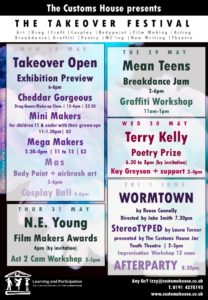 The Takeover is our Youth Arts Festival at The Customs House. The Takeover benefits thousands of people across the North East and the festival gives young people (25 and under) the chance to take part in arts activities and events picked and organised by The Takeover Team. The team are our group of young people who are developing their experience as young arts leaders.

The support of our funders means The Takeover has got bigger and better. Thanks to Arts Council England, South Tyneside Council, Scottish Power Foundation, The Barbour Foundation, WA Handley, Community Foundation for Tyne and Wear & Northumberland, Paul Hamlyn and our supporters The Shields Gazette, The Word and Red Squirrel Press. Most Takeover activities and events were pay what you decide making sure everyone can take part. Pay what you decide means you pick up a free ticket, then donate what you can. Your donations, collected during the festival, help towards next year’s festival. 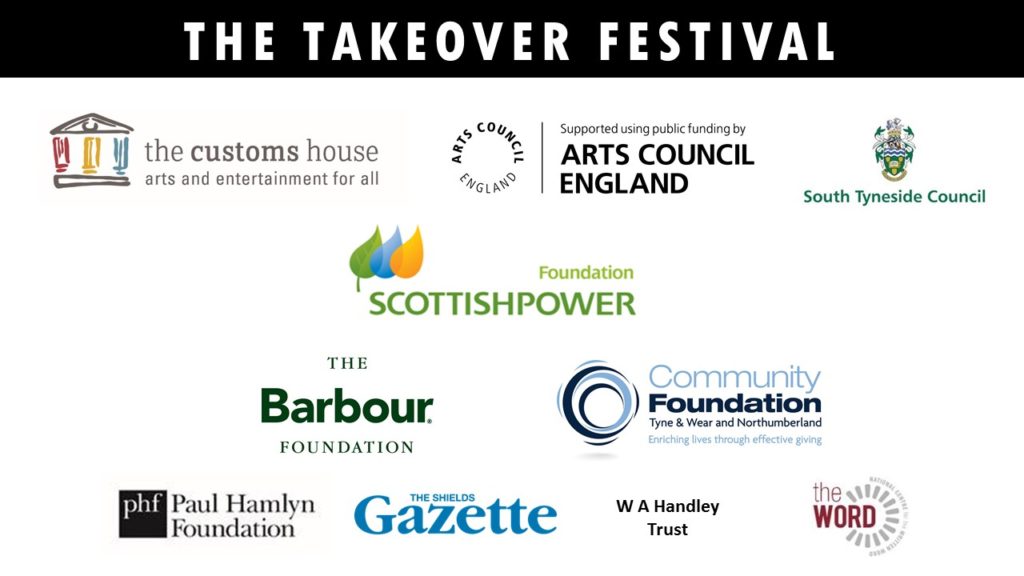 Read on to find out more about The Takeover’s highlights this year.

On Monday we welcomed Cheddar Gorgeous to The Customs House. Cheddar traveled up from Manchester and led a drag masterclass with fifteen young people. Cheddar shared his experience of using makeup to express and explore his identity. The young people had the makeup, tools and time to try new things. We were delighted to bring this internationally recognised artist to The Customs House. 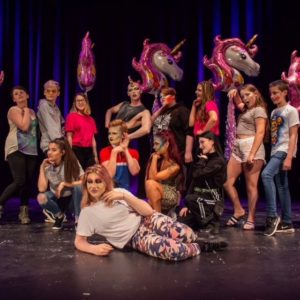 Cheddar Gorgeous and the Drag Masterclass

Sophie and Ruby Ifenjuna who were first time visitors to Mini Maker said the best thing about the day was coming to The Customs House. We look forward to welcoming more new young people to Mini Makers in the summer holidays.

The gallery was packed on Monday evening for The Takeover Open Exhibition preview. Matt Antoniak one of the founders of the artist-led Slugtown gallery space in Newcastle (http://slugtown.co.uk) acted as our lead judge. He came to his decision alongside Lauryn Lamb from The Takeover Team. Our judging panel picked as this year’s winners as:

Matt was keen that Lesley Guy our Gallery Learning Officer shared with the gathered crowd how it had been a difficult decision. Several pieces of artwork were highly commended. You can see the winning artworks as well as the other entries 31st August.

Along with a certificate and art materials bundle Jessica Donnelly, our 19 to 25 winner, will also receive some mentoring before having a solo exhibition at The Customs House later this year.

A special mention goes to all the parents and teachers who helped their young artists get organised and enter especially South Shields School, Whitburn Academy and Farringdon Community Academy who each submitted work on behalf of their students.  You can also add to our Takeover drawing wall with your own sketches inspired by the exhibition.

On Tuesday graffiti artist Mark Shields led a workshop. Each young artist produced their own canvass after developing their own unique design. Once again the workshop was oversubscribed so we’d recommend you come into The Customs House to pick up your pay what you decide tickets in advance to avoid disappointment for #TheTakeover19 (usually we announce the programme in mid May). You can see Mark’s work here: www.behance.net/markshields.

Joe Henderson our Takeover Team member worked with Just Jam International and Bad Taste Cru to bring us this year breakdance battle. This year’s battle moved to the main house in the theatre following huge crowds in 2017 Takeover. Bboy and bgirl break dancers came to compete the entire North East and beyond with a strong cru representing Leeds. 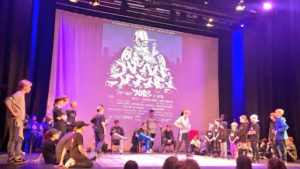 Ray Spencer The Customs House Executive Director popped in to see the battle and whilst he resisted the invitation to join P (aka Paul Martin) on stage!

Rhymes and Poems Wednesday 30th May

On Wednesday, The Takeover Team welcomed Heather McDonald from Scottish Power Foundation to The Customs House. Heather asked the team lots of questions about their experience. Lesley talked about actually being given real ownership of the project. Joe said, “We’re really responsible” a sentiment echoed by Megan. Lauryn said she wanted to continue volunteering helping with the gallery and Mini Makers.

Later, Kay Greyson + Max Gavins Kay Greyson’s unique hip-hops sounds filled the Green Room. Kay spent some time chatting to The Takeover Team about how she got into writing, producing and performing. 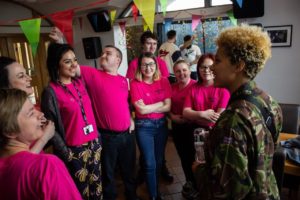 The Takeover Team and Kay Greyson.
Photo by Wycombe 89 Media.

We celebrated young poets’ writing with third The Terry Kelly Poetry Prize. Returning judges Alistair Robinson and Tom Kelly selected the winners this year. They were:

Winners made the front page of The Shields Gazette. You can pick up a free copy of the anthology at The Customs House and The Word. Act fast because when they’re gone they’re gone! The young poets joined us at Custom Space to record their poems. We will be publishing the anthology online and releasing the recording soon! 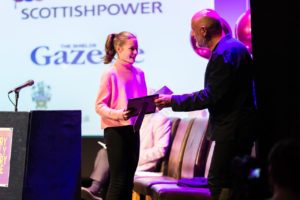 “Poems can do amazing things. The pleasure that comes from reading and writing isn’t to be underestimated. If this was your first poem or your hundredth poem keep reading, writing, noticing things… be inquisitive about our amazing world and the people in it… you’ve all got a spark of talent and talent is nurtured by practice, hard work and joy… We look forward to receiving even more entries in 2019.”

“I just wanted to say a huge thank you for awarding me the prize again. Not only is it an absolute honour to be involved and share the stage with such wonderful poets, but it has also been a big eye opener for me in terms of knowing my writing can go somewhere and does something for other people. I had the most amazing time in the recording studio with Finn from the younger category – what a creative genius he is! I am thrilled to have been invited back as a young judge and can’t wait to get involved with that as well as all of the other interesting things going on with The Customs House. If you ever need any reviews or comments on the prize or the Takeover you know where I am, I can’t compliment you all enough!” 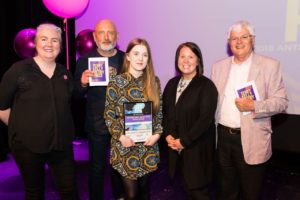 Finn really enjoyed it too (recording in the studio), thank you for sorting all these things out. The Takeovers are good opportunities for kids and adults, and let’s hope more people continue to enjoy them.

Today Finn was doing an assembly in his school about his award winning poetry, we hope he inspires more young writers. 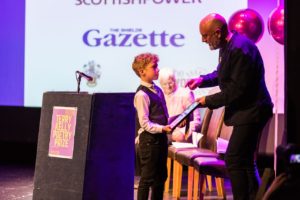 On Screen Thursday 31st May 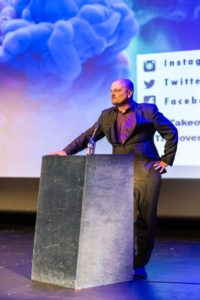 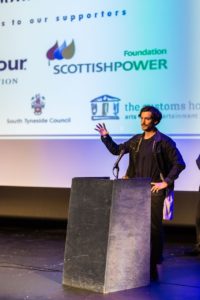 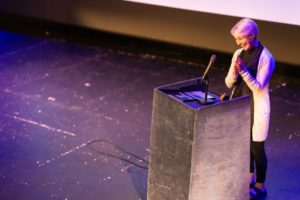 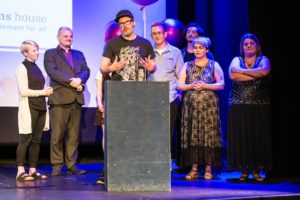 A Day of Drama and the Aftershow Party Friday 1st June

In the evening audiences enjoyed the packed out performance of WORMTOWN by Reece Connolly our first ‘Takeover Writer in Residence’. WORMTOWN was a comic re-imagining of the Lambton Worm into, ‘A new legend of misfits and monsters’.

Reece Connolly is a North East-born and bred playwright and theatre-maker, and has been based in East London. Laura Turner acted a a writing mentor to Reece.

All the players were under 25 and included many of the region’s best known up young performers namely Abigail Lawson, Lauren Waine, James Gladdon, Andrew Finnigan, Luke Maddison, Kema Sikazwe, Serena Ramsey and Daniel Watson. Many of the cast trained with The Customs House Youth Theatre or had their first professional paid role on stage here. When The Customs House brings together an exciting team of creative people great things like WORMTOWN happen. It’s perhaps easy to forget, this is due in part to great leadership from The Customs House Deputy Director Fiona Martin who was locked in the rehearsal room for most of the week too! Thank you for coming to support new writing and emerging talent. 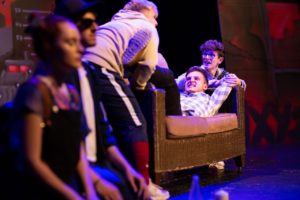 Kub (BLC) aka Jacob Brown(who DJs at Ernest and TwentyEight in Newcastle) played to a packed Green Room in the AFTERPARTY. If you were there you know the funk and soul sounds kept the festival vibe going till late.

And we continued to spread #TheTakeover18 joy donating our balloons to Northumberland Pride.

Believe it or not we didn’t talk about everything here including Blowing a Hooley’s Improv workshop, Act to Cams session, the cosplay meet or The Takeover drawing wall.

If you have any photos of the week  share them on social media including #TheTakeover18. If you would prefer you can also send your feedback to [email protected]

Thanks to everyone who took part, watched and supported or helped with this incredible week from all in the Learning and Participation Team at The Customs House.  A special mention goes to Catherine Scott who heads up our Takeover team and Chris and Grant from Wycombe 89 Media who are busy producing our Takeover Film.

Finally, we extend our thanks to Ray Spencer Executive Director, Jordan Embleton Technical Manager, the front of house and box office teams, The Green Room and our board for getting behind the festival and helping make it such a wonderful week.

This work is possible due to the generous support of our funders; South Tyneside Council, Arts Council England, W A Hanley Trust and Scottish Power Foundation