The Customs House’s young filmmakers had the pleasure of working with an award-winning director at their last meeting.

Benjamin Bee, who is from Newcastle but studied at London Film School, talked to our filmmakers about his work as a director, which includes no-budget short films and bigger projects like his work for Baby Cow, the production company behind Philomena and Alan Partridge.

Our members presented their ideas for their latest project, a short comedy film about an unwanted guest, to Benjamin during the session. He encouraged the film’s writers to act out the scenes and suggested ways to develop the comedy and tension in the film. With his films Mordechai and Step Right Up having played at festivals all around the world and receiving numerous awards, Benjamin was perfectly placed to give advice about putting together a successful short.

Those in attendance were also inspired by his words of wisdom when it came to achieving their ambitions. Hard work, finishing their own projects, collaborating with friends and making contact with people higher up the ladder of success were all pointed to as ways to get started in the film industry. The group was even treated to stories of encounters with huge Hollywood stars as an example of how someone from the North East could make inroads into the industry. 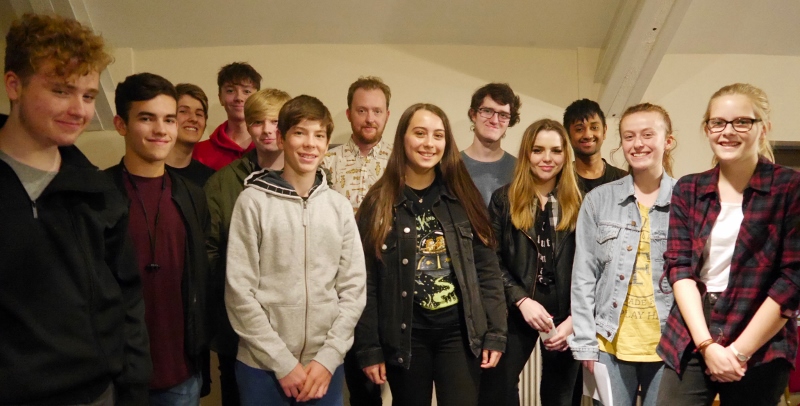 Our filmmakers with director Benjamin Bee

Long-serving member Hassan was chosen as the director of group’s next film during the session. Hassan joins producer Lucy and writers Georgia and Zack to develop the film further.

Skills sessions in sound and music, costumes and props and technical equipment will continue for the next month and the film will be shot in late November.

Filmmaking at The Customs House takes place each Thursday from 5 to 7pm, and is suitable for 13 to 19 year olds with tickets costing just £3.50 each week. For more information or to join the group, contact Daniel on 0191 427 8193 or daniel@customshouse.co.uk.

Get The Latest Info In Spotlight Issue 18. Available Now

Read All About It in Spotlight 17

Welcome to issue 17 of Spotlight, our very own...
Read more