Home News Filmmaker Introduces Group to the Art of Film

Filmmaker Introduces Group to the Art of Film

Our filmmakers enjoyed another behind-the-scenes look at film during a session with art director and production designer Lesley Anne Rose.

Lesley Anne Rose introduced the group to the work of a film’s art department. The workshop looked at how costumes, props and sets are used in films. Lesley explained that everything shown is used to tell the story – down to the smallest details of a set. Lesley’s work has included the award-winning short They Live In Forests, They Are Extremely Shy. Her role on the film was to turn Newcastle’s Mining Institute into the Colonial Exhibition of 1886 on a small budget.

The group read through their new film’s script together for the first time and discussed design ideas. They discussed the character’s costumes and made decisions on the colours they will use in the film. The art department was also formed during the session. The film’s writer, Georgia, will work with budding artist, Megan, and new member of the group, Ryan to form the art team. 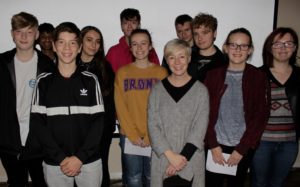 Lesley Anne Rose with our filmmakers

Next week’s session will look at sound design and soundtrack composing with Roma Yagnik.

Filmmaking at The Customs House takes place each Thursday from 5 to 7pm, and is suitable for 13 to 19 year olds with tickets costing just £3.50 each week. For more information or to join the group, contact Daniel on 0191 427 8193 or daniel@customshouse.co.uk.