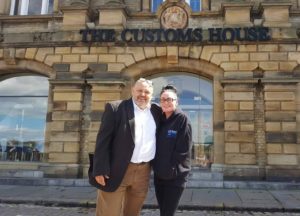 The Customs House is delighted to announce its charity partner for the 2017/18 panto season – The Charlie Cookson Foundation (CCF).

Every year, generous audiences dig deep to help raise money for a good cause during the theatre’s busiest time.

Last year, more than £10,000 was raised for the NSPCC as the charity celebrated the 30th anniversary of its children’s counselling service, Childline.

It was a record-breaking amount and the theatre is hoping to smash it again when The Lambton Worm, sponsored by Hays Travel, takes to the stage between November 28, 2017, and January 6, 2018.

It was set up in 2013 by Sarah and Christopher Cookson, from South Shields, in memory of their brave son, Charlie, who died that same year, aged two-and-a-half.

The toddler had fought a number of health battles from birth and the community rallied around the family as doctors tried to pin down a diagnosis.

Sarah and Chris set up CCF to help parents in similar circumstances and repay the kindness and support that had been shown towards them during Charlie’s short life.

CCF is constantly fundraising and aims to support one family a month, so parents can focus on caring for their child without having to worry about taking time off work or paying the bills.

Sarah said: “We are absolutely delighted that our foundation has been selected by The Customs House to be their chosen charity throughout the pantomime season. We are very overwhelmed and extremely grateful for the support.

“This a great opportunity to raise awareness for our unique foundation and raise much-needed funds. We are looking forward to being actively involved in promoting our foundation and the work we do throughout the very busy panto season.”

Ray Spencer MBE, executive director of The Customs House, who also writes, directs and stars in the annual pantomime, said: “Every year we are just astonished by people’s generosity and our audience always dig deep to raise an impressive amount.

“We’re delighted to be helping the Charlie Cookson Foundation this year, which in turn will help relieve the distress of worried parents at the most difficult time in their lives. We hope our panto audience give generously to this great cause.”

Tickets are now on sale for The Lambton Worm, sponsored by Hays Travel, with prices starting at £9.99. Contact the box office on (0191) 454 1234 or book online at www.customshouse.co.uk/theatre/the-lambton-worm/