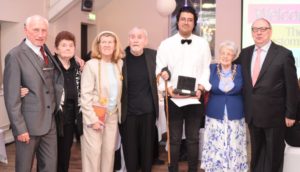 Four people from South Tyneside who have made an outstanding contribution to the arts have been inducted as Honorary Fellows of The Customs House Academy.

The honour was bestowed upon animator Sheila Graber, playwright Alex Ferguson, artist Bob Olley and businessman Richard Ord, in a special ceremony at The Customs House on Thursday, March 22, attended by invited guests.

They were presented with their awards by Ray Spencer MBE, Executive Director of The Customs House, and the Mayor and Mayoress of South Tyneside, Councillor Olive Punchion and Mrs Mary French.

Mr Spencer said: “It was a terrific opportunity to celebrate the unique talent and career longevity of four extraordinary people.”

Coun Punchion added: “Congratulations to all the Honorary Fellows on receiving their awards.

“South Tyneside is well known for its wealth of talent, with The Customs House playing a major part in nurturing aspiring stars of the future.

“It’s wonderful to recognise and celebrate those who are doing such great things and helping to inspire the next generation in arts and entertainment.”

Sheila Graber, who was born and raised in South Shields and worked on the Paddington animated television series, was recognised as an artist, animator and teacher.

She said: “In the 1950s I remember my dad, Pilot Master on the Tyne, pointing out The Customs House to me and explaining how it helped shipping on the Tyne prosper.

“Throughout the 1970s and 80s, I was art critic for The Shields Gazette. This enabled me to visit all the many and varied galleries scattered throughout Tyneside, featuring not just painting, but music and drama too.

“The Customs House came along in the 1990s and gave all this art a heart and kept up the tradition of helping Tyneside prosper. So it is a particular pleasure for me to receive this Honorary Fellowship from a building and town I know and love.”

Alex Ferguson, who was born in Jarrow and also grew up in South Shields, has written for TV, radio and film and founded Bold As Brass Theatre Company.

He was honoured in recognition of outstanding and continuous achievements as an award-winning playwright and author.

He said: “I have lived and worked all over this island of ours, but I have always left a footprint in South Shields. Somehow, I have retained an elastic umbilical cord that pulls me back to Shields every time. Perhaps it’s the fact that the ghosts of all the people I ever loved walk the streets of Shields?

“For me to be honoured as an Honorary Fellow of The Customs House would please them as greatly as it does me. My face is pink with pride.”

Bob Olley, who was recognised as a sculptor, artist and painter, said: “My family and I are overwhelmed by The Customs House Honorary Fellowship Award.

“It was especially gratifying as so many of my long-time friends attended the dinner and I thank them all for their support over the years.”

Richard Ord was honoured in recognition of the support The Customs House has received from Colmans over the last 10 years.

He said: “Ray and all the team at The Customs House have done such a tremendous job and we are only too pleased to support them in our small way.

“I am absolutely delighted and honoured to be made an Honorary fellow of behalf of all at Colmans. It really and truly is a thrill.”