Home News CURTAIN UP ON NEW SEASON AT THE CUSTOMS HOUSE

CURTAIN UP ON NEW SEASON AT THE CUSTOMS HOUSE 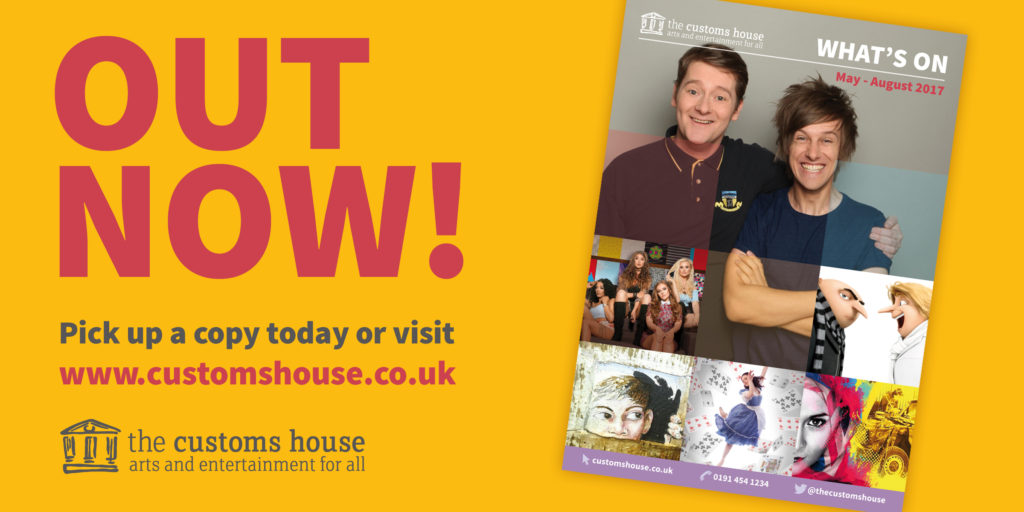 Customs House audiences are in for a treat as the programme for the next few months is packed with comedy, drama, dance and music.

The season opens this week when the Customs House Big Band makes a welcome return to its home venue on Friday before legendary Irish singer Dominic Kirwan brings his new show to the north east on Saturday.

Jason Cook is back on home turf with his own comedy club nights on Saturday, May 13, Saturday June 3 and Saturday, September 2. As well as hosting his own shows, Jason will also be hosting the South Tyneside Comedy Festival, which will run from July 1 and August 6 and features Rory Bremner, one of the UK’s best-loved comedians.

Ten other acts have already signed up for the festival, with more being added every week. Evergreen comedy duo Ray Spencer MBE and Bob Stott are one of the acts confirmed. Ray and Bob, who delighted panto audiences for nearly 40 years, are back with their own show on Friday, July 14.

The new season includes the return of an old favourite – The Takeover Week. The week involves a team of young people under the age of 25 programming The Customs House for a festival of music, cinema, theatre, poetry, hip hop and theatre.

Drama highlights from the new season include The Filleting Machine, by Tom Hadaway, and set in the 1980s on a tough north eastern estate. Austen’s Women will be another highlight – the show brings together 13 Jane Austen heroines from critical moments in the writer’s major novels and lesser-known works and will be part of The Write Festival, organised by the National Centre for the Written Word, The Word.

Asif Khan’s debut play, a gritty comic drama called Combustion, will be staged on July 6, and will explore issues facing young British Muslims living in the north today. Asif was recently named as part of the BBC’s New Talent Hotlist for 2017.

Drama continues with the musical Legally Blonde (August 11 – 13) performed by The Customs House’s Summer School and local writer Neil Armstrong’s End of The Pier, a critically-acclaimed comedy that will be staged from August 22 – 26. And at the end of this month (May), there’s also a musical adaptation of E. Nesbit’s much-loved book The Railway Children.

Meanwhile, some of the UK’s best tribute acts will be appearing at the venue, including Talon, the Best of the Eagles; T.Rextasy; Money for Nothing performing all the hits from Dire Straits; King of Pop, a tribute to Michael Jackson, Magic, A Kind of Queen and Little Fix, who will power through the back catalogue of Little Mix hits.

Other live music highlights include Back in our Rock n Roll Days featuring Billie Davis and Alan Warner, Brian Poole and the Tremeloes and local singer songwriter Jen Stevens (Thursday, May 25) who has just launched her debut solo album.

Andy Fairweather Low and the Low Riders will be performing later this month, while popular local singing group Encore have two shows coming up – their annual May show is on from May 16 – 20, and they’re teaming up with the Rotary Club of Jarrow with Harton for a charity night on July 13.

Renowned architectural historian Dan Cruickshank will be taking his audience on a journey through time and place in a fascinating talk on Saturday, July 8.

If you’re looking to keep your young ones busy over the long summer holidays, then The Customs House is the place to be. First of all, for the under sevens, there’s the return of Doddington the cow and Arbuthnot in … And the Cow Jumped Into the Woods and another show for younger children is Beauty and Beast, a summer panto (July 26 and 27).

If your youngsters are more interested in performing than watching, then sign them up for a Search for a Summer Star, The Customs House’s own talent show, looking for the next Jade Thirlwall or Joe McElderry. Young performers will also have the chance to appear in Legally Blonde.

If you’re a fan of dance, then there are several performances that may interest you – including Staging the Dance, a showcase for undergraduates from the University of Sunderland, and Alice in Wonderland, a magical ballet adventure based on Lewis Carroll’s children’s book.

Executive Director Ray Spencer said: “I’m so proud of our summer programme and I really believe it has something for everyone – from top UK comedian Rory Bremner to Irish superstar Dominic Kirwan to the fantastic local talent we’ll be showcasing in several locally-produced dramas and musicals.

“The return of Doddington the cow in her new show is bound to be very popular for families with young children, as will our summer panto Beauty and the Beast.

“And talking of panto’s – it’s never too early to book your tickets for The Lambton Worm, this year’s Customs House panto, as they’re selling quickly.”

For more information on what’s on when at The Customs House, or to book tickets, check out our website or download your copy HERE.