The Customs House is invested in nurturing North East talent.
Our current open opportunities are below: 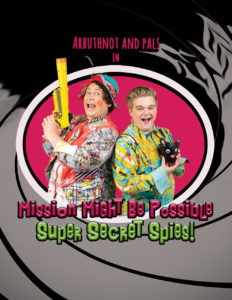 Villain (Shhh, it’s a secret) – (Those who identify as male) Looking for a strong comedic actor with pantomime experience. The villain is an absolute master of disguise, throughout the show this actor will have to display many different accents and characteristics. Before the big reveal that they were the mastermind all along!

Smoochy Delicious – (Those who identify as female) Not your typical ‘Bond girl’. Looking for a strong comedic actor. Smoochy betrays the villain and helps our bumbling idiotic heroes. Appears to be a ‘bond girl’ but is super clumsy and has the world’s most annoying and unattractive laugh. Must be a strong singer and have good dance ability.

Achoo – (Those who identify as female)  Achoo is our gadget expert! She has all the tech for our heroes and is the intelligence of the group. But she isn’t afraid to get her hands dirty and take out a bad guy herself too! Must be a strong singer and have some dance ability.

Ears – (Any Gender) Ears is our Villains henchmen. In typical Fleming fashion, they are named after the thing that makes them stand out. Their ears! You could never sneak up on them and they can hear everything. They put up a good front but really, they just want to be accepted and loved even though they have huge ears. Strong mover and ideally some gymnastic experience.

We encourage applications from people of all backgrounds.

We also encourage first time applications, whether that is because you are new to the industry or haven’t heard of TCH before, we’d love to meet you.

The Deadline is Wednesday 30th June at 5pm

The Customs House are casting for their September production of “Our Laygate” by Ann Ahmed. Directed by Mina Anwar.

We are looking for actors who have a connection to or are resident in the North-East.

We are looking to bring together a company of actors from a range of cultural backgrounds and lived experiences. We are actively committed to inclusive casting and production processes.

Auditions will take place at The Customs House, South Shields on the 12th and 13th of July.

Note: Our Laygate is an exploration into racism, poverty and class in the 1960’s so includes some upsetting content and language. The word Arab is being used in the context of the 1960’s use.

Cathy was only twenty when she married her husband of Yemeni/Arab Heritage. Two children later, they moved into Laygate, a thriving multicultural community in the 1960’s. Later, when her husband is lost at sea, life becomes a desperate struggle against hunger, poverty and fear. Not only having to deal with the discrimination aimed against her for marrying outside of her culture, Cathy has to bring up her four children single handedly. But love and friendship can move people to act in the most generous ways.

Our Laygate, a gritty drama in which the attention is deliberately focused on women and children; a powerful portrait of female suffering and endurance in the 1960s.

CATHY: Cathy is a 34 year old white woman, who has a South Shields accent.  She has had a very traumatic childhood, and came to live with her Aunt when her mother died.  She suffers abuse and prejudice for marrying an Arab man.  Cathy is always living off her nerves and trying to make ends meet as she has 4 children to look after.  Cathy adores her husband.

Note: The Children will be played by adult actors.

JANICE: CATHY’s oldest child, a 12 year old mixed heritage girl (White/Yemeni) born in South Shields and speaks with a South Shields accent. While Janice is bossy and sensible, she has lots of friends, and is academic at school.  She is obedient to her mam and tries to help her when asked.

ANN: CATHY’s second child, a 10 year old mixed heritage girl (White/Yemeni) Ann was born is Laygate, and has a South Shields accent.  Ann is very slight.  Ann is a “tomboy” who is mouthy and always getting into trouble. Her best friend is Marina.

BARRY: CATHY’s third child, a 8 year old mixed heritage boy (White/Yemeni) He has a South Shields accent. He hates his Arab/Yemeni heritage as he gets racist abuse and prejudice from those outside Laygate. Barry hates being poor and dirty all the time, and tries to do the right thing and is adventurous.  He is  very intelligent and always in Ashou’s café.

ASHOU: Ashou is a 45 year old Somali seaman who came to settle in Laygate after the war ended.  He is Marina’s dad. He has a café where the sailors congregate.  He is very strict with his children. He is a good friend to everyone in the lane. Ashou finds out a secret about Cathy’s husband, and feels awful knowing that she is struggling, waiting for the man she loves.

Note: The Children will be played by adult actors.

MARINA: Ashou’s Daughter. A 10 old Somali girl, born in South Shields and speaks with a South Shields accent. Marina’s parents are too busy running their café at the bottom of the lane to take much notice of her, so she loves being invited into CATHY’s home, and is ANN’s best friend.  Marina is known to pilfer and steals sweets from the corner shop.

MAUREEN: Maureen is a 34 year old white English resident of Laygate, who speaks with a South shields accent.  Maureen has lived opposite Cathy with her husband and three children for 9 years.  She is a great neighbour to everyone and she feels sorry for Cathy, as she witnesses the abuse Cathy endures and so helps her out whenever she can.  Maureen is maternal and very understanding. She gives Cathy any cast offs she has, and is a friend and shoulder for Cathy to lean on.  She feels guilty that she has learned a secret about Cathy’s husband and so tries to distance herself away from Cathy as she can’t live with the guilt.

MOIRA: Moira is a 38 year old white English woman who speaks with a South Shields accent.  She takes care of her appearance, she is slim and wears makeup, even if she’s cleaning her back door.  She is married, her husband is a ‘respectable’ bus driver and has 2 young boys. Her own family broke up because her mother cheated on her father with an Arab man, and she can’t find it in herself to forgive her.  She is still very hurt by this and has a lot of prejudice towards the Arabic community and specifically towards Cathy’s mixed marriage and mixed heritage children. She lives at the top of the lane, the posher area of Laygate and has only lived there a few years.

We encourage first time applications, whether that is because you are new to the industry or haven’t heard of TCH before, we’d love to meet you. 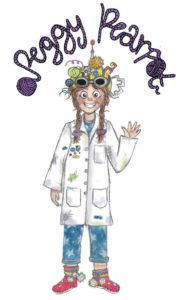 We are thrilled to be able to offer a new opportunity for four actors to work on a new children’s play called Peggy Pearpot by Danielle Burn.

It is due to tour outdoor community venues from 16-20 / 23-24 August and performed at The Customs House on 21/22 August with two weeks rehearsal beforehand.

This will be an ensemble piece, where all performers will be doing some basic puppetry, movement and singing. Please highlight on your application if you have experience in these areas.

By Danielle Burn. For ages 4-7 years

Peggy Pearpot explores the world inside a tear drop, or two, or maybe three. All tear drops belong to Peggy Pearpot. Peggy just can’t stop crying! She cries when she is sad, frustrated, worried, angry, annoyed, and happy. Peggy is confused and frustrated that she can’t communicate her feelings clearly to her parents, teachers or even her friends; she is beginning to get fed up. One night, whilst examining one of her tear drops and wondering what these blobs of water really are, she is transported inside one of her very own tears by Sniffle, the keeper of all the tears on earth. What sort of world is hidden inside a tear drop? Are all tears the same? Who lives inside a tear drop? Can the characters she meets help Peggy understand how to communicate her feelings and help her?

We are looking to cast 4 roles:

Peggy: Peggy is 6 years old, often covered in mud and bruises and always hungry. Although she smiles for a lot of the day, Peggy spends most of her hours scared and worried (when she’s not inventing or playing make believe of course)

Dad: He is a mumbly, clumsy and sorrowful man. His circular glasses are a bit too small for his rather large nose, and his hair always has mud and bits wool and fluff stuck in his hair.

Sniffle: They are the keeper of tears and wears a wonky train drivers hat, raggy pants, tap shoes and a tartan bow tie. They carry a small briefcase with them at all times. They look bewildered, nervous and confuzzled.

Mayor Sniggertop: loud and snooty and unaware of what’s going on around them.

The audition will be on June 30th and will be a 2-hour group workshop. You do not need to prepare anything.

We encourage applications from people of all backgrounds.

We also encourage first time applications, whether that is because you are new to the industry or haven’t heard of TCH before, we’d love to meet you.

The Learning and Participation Team at The Customs House engage diverse communities in a range of creative experiences, both in the venue and across South Tyneside.Our regular groups for young people are currently The Customs House Youth Theatre, Ours/Us/We; an LGBTQ arts group, and The Takeover Team.This young talent development work is described as “exemplary” by Arts Council England.

The Customs House Youth Theatre is open to all young people who have an interest in drama, devising and acting. The Youth Theatre meet each Friday from 4.30-6.30pm and produce two original performances each year.

There are three 12-week terms per year, and the structure is as follows:

We are looking for a dynamic, organised and inspiring facilitator who is confident to lead and plan theatre/drama sessions, direct a scripted piece, show flair and confidence in devising material with the group and develop young performers with the skills and experience to enjoy performing and develop an interest in theatre.

The fee is £600 per term (£50 per session x 12 weeks); additional hours for performances and get-ins will be additional to this fee and negotiated in advance of performances.

If you are interested in being considered for this opportunity, please email Fiona@customshouse.co.uk either with a CV and covering email, a PPT, or a video of 3 minutes outlining your interest and suitability for this role no later than Friday 30 July at 5.00pm. Shortlisted applicants will be asked to attend an informal interview on Friday 6 August at The Customs House.

To view previous creative opportunities at The Customs House,
Please click HERE to visit our archive

Get regular updates from our Learning and Participation team

Find out more about our "outstanding" work with children and young people.

Get Up Get Involved

Are You Ready To Do Something Amazing?

It’s Friday and Time For The Latest Issue Of Spotlight

ISSUE 24 of SPOTLIGHT is here. In this issue,...
Read more

Welcome to Spotlight Issue 23, our very own e-magazine...
Read more