Countdown to the Takeover 2018 begins…

The countdown is on for the Takeover 2018, with a month to go before the festival is underway. 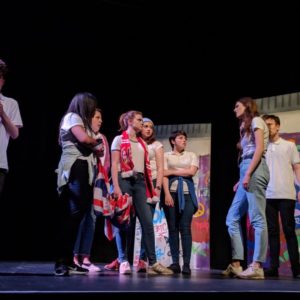 Young performers on stage at The Customs House, South Shields

The Takeover runs from 28 May-1 June at The Customs House with an exciting line-up of events, competitions, films and performances. The festival is linked to the Takeover Day national initiative, encouraging young artists from the region  to take on key roles as part of The Takeover Team.

Our full programme will be announced on Thursday 10 May!

Until then, highlights of The Takeover 2018 include….

North East Young Filmmakers Awards. The Customs House will be bringing together emerging filmmakers from all over the region with industry professionals to celebrate the best North East talent on Thursday 31 May. Prizes will be awarded for the best screenplay, cinematography and sound & music, along with the grand prize of North East Young Filmmaker. There will be a screenings of all shortlisted films in the Main House (on the BIG SCREEN!) and an awards presentation.

Mean Teens Breakdance Jam. Breakdancers from around the North East, North Yorkshire and the wider United Kingdom will battle each other be crowned the Mean Teens winner 2018! With live DJs and MCs, exciting 2 on 2 battles, Judges’ showcase and featuring performances from local street/break dance crews. The competition is open to dancers aged 19 years and under with prizes are awarded for first and second place. For more information, email Izzy.

Theatre Residency: In 2018 we will be building on the success of our Takeover Theatre Residency programme by creating an exciting development opportunity for eight young actors aged 17 to 25 years old from the region.

The play, ‘WORMTOWN’ is written by local writer, Reece Connolly. Reece is the venue’s first Takeover Young Writer in Residence, and we are delighted to produce his play:

WORMTOWN : A new legend of misfits and monsters.

Something is terrorising the Lambton Council Estate, and it’s not the bulldozers and wrecking balls that have started pulling the towers down.

This thing hunts at night, and its hunger and taste for destruction grows with each day. Streetlights are uprooted like toothpicks, the water’s started tasting funny. People are going missing.

Those who’ve seen it and lived describe it as a giant, ferocious worm.

But the police won’t listen and the news doesn’t care. As the beast’s reign of terror continues, it falls to a small group of unlikely heroes to go into battle and save a community that no one else will.

But are a bunch of misfit teens and a mysterious loner enough to stop a force as powerful as it is ancient?