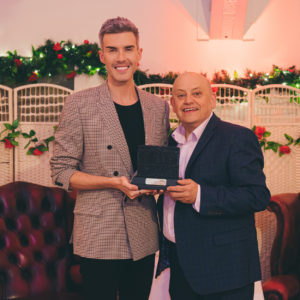 The singer, from Washington, rose to fame as one-fifth of musical theatre boyband, Collabro, who won Britain’s Got Talent in 2014 and have gone on to become the world’s most successful musical theatre group. The Customs House holds a special place in Jamie’s heart, having first performed on the South Shields theatre’s stage as a youngster.

He said: “I couldn’t be more grateful to The Customs House for this fantastic honour. I started my career at this beautiful venue and to be recognised in such a way is really moving. I will always hold The Customs House in high regard, it’s such an important regional venue and a place where so many young people find their voices.” 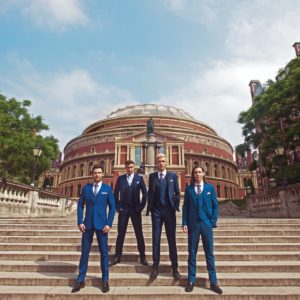 Through the band, Jamie has sold over one million records, celebrated three top five albums, performed for over 100 million people around the world and completed three sell-out tours, which culminated this year in a spectacular show at the Royal Albert Hall. He has also written for various publications speaking out about being an LGBT advocate and in 2017, he hosted the first ever live red carpet show at the prestigious Olivier Awards, which was broadcast to over five million viewers. This led to regular presenting slots for Official London Theatre, Broadway World and Disney and saw him return to host The Road to the Olivier’s in 2018. He has also launched his own theatre production company.

Ray Spencer, Executive Director of The Customs House, said: “We are delighted to have Jamie become our next Fellow. He is a fantastic role model for our aspiring young people to see what talent and hard work can achieve.”

Jamie, who now lives in Hertfordshire, joins fellow singers Anne Marie-Owens, John Miles, Joe McElderry and Little Mix’s Jade Thirlwall as Honorary Fellows of The Customs House Academy, which was established to recognise and honour the achievements of exceptional individuals, with a significant connection to South Tyneside, who have made a major contribution to the world of arts and entertainment. Other members include comedians Sarah Millican, Jason Cook and Chris Ramsey, dancer and choreographer, the late Lindsay Kemp, poet and playwright Tom Kelly, artist Bob Olley and writer Alex Ferguson.

Jamie received his fellowship during an Honorary Fellows Festive Fizz Afternoon Tea where he was also interviewed by BBC Radio Newcastle’s Stephanie Finnon. To keep up to date on future special events, click HERE to sign up for our weekly e-newsletter.