The Customs House is delighted to announce the full cast for the first Takeover Young Writer in Residence’s play, WORMTOWN written by local writer, Reece Connolly. 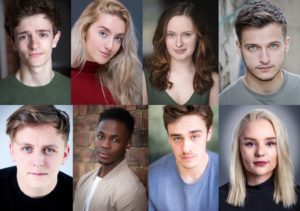 Reece Connolly is a North East-born and bred playwright and theatre-maker, and has been based in East London since studying Drama at Queen Mary University. He now splits his time between London and the North East.

WORMTOWN is a re-imagining of the Lambton Worm fable and is described as, ‘a new legend of misfits and monsters’, and is a darkly comic, sci-fi tale.

All of the cast are under 25 years old, and the purpose of this strand of The Takeover is to give a platform for young actors, as well as giving emerging actors more professional experience.

Amongst the cast, is local actor Andrew Finnigan, who is starring in My Uncle Freddie this summer, and will be playing, Kezzy.  The Customs House was where it all started for Andrew and he can’t wait to return with such a unique and gripping show.

Also returning to the venue, are former Youth Theatre and recent Arts Ed graduate James Gladdon, playing J, and Lauren Waine, playing Cassie, a graduate from The Liverpool Institute for Performing Arts (LIPA) who is delighted to be back at The Customs House where her career began. We’re also thrilled to have the star of our pantomime, and Geordie the Musical, Luke Maddison, as Scrum.

Playing Batter, is Sunderland’s Abigail Lawson, who is thrilled to be a part of WORMTOWN, which will be her second professional credit following Blowin’ A Hooley’s WANT, since graduating from Newcastle College this year.

In the multi-roles, there are Daniel Watson, trained at Project A, Theatre Royal Newcastle who recently starred in The Terminal Velocity of Snowflakes at Live Theatre. Alongside, Daniel, there is Serena Ramsey, who is a Newcastle born actress whose first TV appearance was in CBBC’s Mission 2110. She graduated from the Court Theatre Training Company in 2017, and finally, Kema Sikazwe from the Newcastle who got into acting in his early 20s and went on to land a leading role in BAFTA, BIFA Palme D’or award winning film I,Daniel Blake.

We are delighted to have Jake Smith on board, who is a director from the North East who began his career at Hull Truck Theatre as a Creative Learning Facilitator. He has since been a Resident Director at the Almeida Theatre, Trainee Director at Chichester Festival Theatre and trained on the National Theatre Directors’ Programme. He is the current Artistic Director of Petersfield Shakespeare Festival and has previously been nominated for an Off West End Award for Best Director.

Reece has been mentored by Laura Turner, who is a writer for stage and screen. She has written more than 30 original plays and adaptations of classic novels, and has most recently worked with the Almeida Theatre, Hull Truck Theatre and One Day Creative. Laura is delighted to be working with the creative team at The Customs House and seeing such an exciting new play develop.