The Customs House is delighted to announce the full cast for the Takeover Young Writer in Residence’s play, Isolation written by local writer, Elijah Young 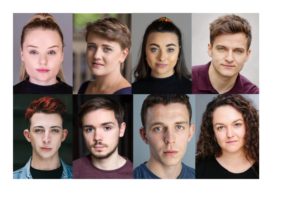 Elijah Young’s play Isolation will be performed at the South Shields venue on 31 May.

He graduated as an actor from the Project A training course at Newcastle’s Theatre Royal in July last year but started writing two years ago. His first piece, Fag Break, which explored struggles of LGBT+ youth, was featured in the last 10 minutes to… night at Newcastle’s Live Theatre and recently he finished the Write Something course at Alphabetti, where his short play Dandelion & Burdock was featured.

His Takeover play, Isolation, follows the story of six students and their teachers at a school in the North East of England and the week they spend together in isolation. Dale is an openly gay student who clashes with Stephen who, despite his act, is struggling behind closed doors.

Returning to the to the venue are Abigail Lawson and Daniel Watson, who both starred in last year’s WORMTOWN. Abigail was last at The Customs House at Christmas as part of the Santa’s Naughty Elf cast, and has recently completed a regional tour with Blowin’ A Hooley’s WANT. Dan can’t wait to return to the Customs House to perform again in this year’s Takeover Festival; his credits Christmas Crackers, The Terminal Velocity Of Snowflakes (Live Theatre) Is This Your Story (Regional Tour) Cheer Up Slug (The North Wall)  and Byker Grove (CBBC).

Also in the company, are Jake Jarratt and Cameron Sharp, as Stephen and Dale, both Northumbria University MA alumni, who recently starred in W*nk Buddies, at Newcastle’s Live Theatre. Cameron is also co-founder, performer, and producer of theatre company and drag trio Bonnie and The Bonnettes who will also be making an appearance during Takeover 19!

Playing Poppy, is County Durham’s Jude Nelson, a Project A Graduate who has worked across the region, and is thrilled to be part of the Isolation cast.

Miss Russell will be played by Daneka Etchells who trained at ALRA North, her credits include: Christine in Miss Julie (CAST, Doncaster), Lacey in Code Blue (Oldham Library Theatre), Beatrice in Much Ado About Nothing (Shakespeare Speakeasy), Clare Short/Various in Acting Leader (Northern Stage), Phoebe in Moth To The Flame (Theatre by the Lake), Ensemble in Under The Market Roof (Junction 8 Theatre), Effie in Monologue Wars (Liverpool Everyman).

Jack Lloyd and Kiera Falcus will both be making their Customs House debut, as Mr Bates and Zara; Jack was nominated as one of the top 20 graduates to graduate from a drama school in the 2017 Spotlight Showcase. Since then he has performed in Wilfred (Alphabetti Theatre) The War of the Worlds (Northern Stage) The Conditioning (Edinburgh Fringe) Luna (Theatre Hullabaloo) County Lines (Brewery Arts Centre).

Since graduating from Project A in 2018, Keira has worked with Michael Corbidge (Royal Shakespeare Company) on his short Elemental Shakespeare course as further training, and has recently filmed for Rianne Pictures’ upcoming short film, Coming Out For Christmas.

Elijah has been mentored by Tamsin Daisy Rees, an associate artist of Live Theatre, Newcastle.

Last year’s director, Jake Smith, another Teessider, who began his career at Hull Truck Theatre as a Creative Learning Facilitator, returns to direct Isolation. He has been a Resident Director at the Almeida Theatre, Trainee Director at Chichester Festival Theatre and trained on the National Theatre Directors’ Programme. He is currently the Artistic Director of the award-winning Petersfield Shakespeare Festival.

Isolation will be staged on Friday 31 May at 7.30pm at The Customs House, tickets are Pay What You Decide.