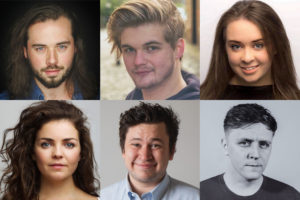 One of the best-loved stories in children’s literature is being given a sprinkle of panto magic at The Customs House this summer. Arbuthnot and Pals’ Adventures in Oz is loosely based on The Wonderful Wizard of Oz, by L Frank Baum, who penned a number of stories about the Land of Oz.

Davey Hopper returns as Arbuthnot and he will be joined by Dale Jewitt as Puddles, Eleanor Chaganis as the Wicked Witch of the West, Luke Maddison as Jack, Glen Richard Townsend as Dennis and Lori Smedley as Cecilia.

Davey made his panto debut as Arbuthnot in Jack and the Beanstalk in 2016 and has gone on to do many shows as the much-loved character. In fact, this will be Arbuthnot’s 10th show at The Customs House!

Davey, who was nominated for Best Comic 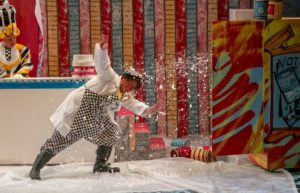 at this year’s Great British Panto Awards for his performance in Beauty and the Beast, said: “Well, what can I say about this show? We are going to be bigger and better!

“This is the largest cast I’ve assembled for any show I’ve directed and what a cast! I absolutely can’t wait to share the stage with them. This is going to be one to remember, with songs and dances that kids of all ages can join in with.”

“I love The Wizard of Oz. It was one of the first shows I ever did on The Customs House stage. When I was 16, I played the Lion in the summer school, so it has a very special place in my heart. You’ve got to get your tickets now!”

In the family show, the Wicked Witch of the West has cast a mysterious spell that has made everyone in Cooksonville believe they are characters from The Wonderful Wizard of Oz! Only Cecilia remembers who she really is. Can she convince Arbuthnot that it’s not real and defeat the Wicked Witch?

Arbuthnot and Pals’ Adventures in Oz is written by Davey and Dale, who trained at the University of Northumbria and NORTH at Northern Stage. 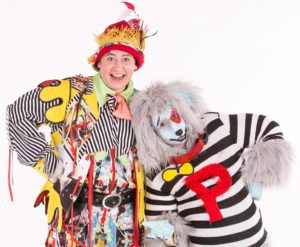 His theatre credits include Christmas Crackers and Clear White Light (Live Theatre), Animal Farm and Growth (Northern Stage) and Romeo and Juliet, The Taming of the Shrew and Much Ado About Nothing (Theatre Space North East). He is also a founding member of Theatre Hoodang and The Canny Network that provide development opportunities and workshops for north east performers.

Eleanor graduated from Guildford School of Acting with a First Class Honours degree in Musical Theatre. She has just finished a regional tour of The Cinder Path after coming back from the international tour of The Jungle Book with S4K. She is an accomplished performer with experience in many genres, from Shakespeare to musicals. She has appeared in The Customs House panto for the last three years.

Eleanor said: “I’m thrilled to be back at The Customs House and very excited to see where this adventure takes us.”

He said: “I’m delighted to be performing in Arbuthnot and Pals’ Adventures in Oz and can’t wait to get started.” 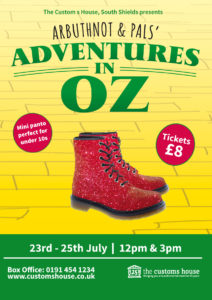 Glen trained in musical theatre at the SA Performing Arts Centre and has played various roles, including five years in panto at the Consett Empire, playing Jack in Jack and the Beanstalk, Buttons in Cinderella and Freddie LeFou in Beauty and the Beast.

Lori has just finished her first year of training for her musical theatre degree at Newcastle College and is trained in all genres of dance and musical theatre at Lumsdale Theatre Arts and South Tyneside Dance Workshop. She has danced in 10 pantomimes at The Customs House and was principal dancer in The Cow Jumped into The Woods, Puddles’ Adventure and Arbuthnot and Puddles’ Pirate Adventure. She played Cecelia in Arbuthnot and Pals’ Detective Agency earlier this year.

She said: “I’m very excited to be joining this fabulous cast and crew back at The Customs House again!”