The Customs House Summer School is putting the finishing touches to its production of Disney’s High School Musical.

Seventeen young people from across the north east, aged between nine and 21, have been working on the show for the last two weeks. They will perform the final piece at 7pm on Friday, August 9, and at 2pm and 6pm on Saturday, August 10 and Sunday, August 11.

They have been working with director Gareth Hunter, choreographer Bethany Slavin and musical director Andrew Clarence on the stage adaptation of the hit Disney Channel movie, which starred Zac Efron and Vanessa Hudgens.
Gareth said: “They have been working extremely hard, but it has been a fun couple of weeks. There is lots of singing and dancing for them, as always, and everyone’s had to step up because there is a lot to do.”
Described as a modern-day Romeo and Juliet, High School Musical made its TV debut in 2006, focusing on two high school juniors from rival cliques – basketball team captain Troy Bolton and shy transfer student Gabriella Montez. When they try out for the lead parts in their high school musical, it causes division among all the school’s students.
Corey Muizelaar, 18, from Sunderland, takes on the role of Troy in The Customs House Summer School production,
while Georgina Whale-Spencer, 17, from South Shields, will play Gabriella in her first principal role at the theatre. 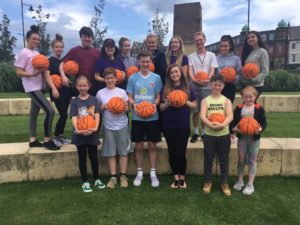 Corey, who played Gomez in The Customs House Summer School production of The Addams Family last year, has been performing since he was 12 and is off to study at Emil Dale Academy in London in September. He said: “It is nice to be in this building. It’s always so busy and there’s always so much happening. I love performing and being part of The Customs House Summer School.”
Georgina, who is a sixth form student at St Wilfrid’s RC College, said: “I am really nervous about it, but The Customs House Summer School has made me a lot more confident about being on stage. “I’m a big High School Musical fan. I remember going to see the last movie, High School Musical 3, at the cinema with my mam and my sister and crying all the way through because I didn’t want it to end.”
Other principal roles include Katie Reed as Sharpay, Robert Wilson-Baker as Chad, Charlotte Harwood as Rhianne (Ryan in the movie) and Megan Heslop as Taylor.
Lili Tron, 12, from South Shields, and Abigail Kairton, 10, from Ashington, are taking part in the summer school for the first time this year. Lili said: “It has been really good fun. I have really enjoyed it.” Abigail said: “Some of my friends have done it before and I came here to watch them do the performances, so I thought I would give it a try.”

Tickets for The Customs House Summer School production of High School Musical are priced from £10 and available from the box office on
(0191) 454 1234 or online at www.customshouse.co.uk.

Step Into The Spotlight This Friday…

In this issue, we’ll give you the latest info...
Read more

Time flies…it seems only five minutes ago we were...
Read more