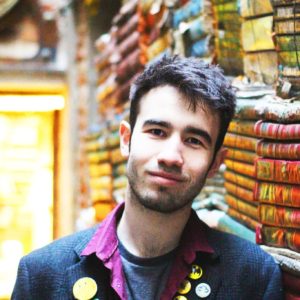 In 2018 we will be building on the success of our Takeover Theatre Residency programme by creating an exciting development opportunity for eight young actors aged 17 to 25 years old from the region.  The play, ‘WORMTOWN’ is written by local writer, Reece Connolly. Reece is the venue’s first Takeover Young Writer in Residence, and we are delighted to produce his play:

WORMTOWN : A new legend of misfits and monsters.

Something is terrorising the Lambton Council Estate, and it’s not the bulldozers and wrecking balls that have started pulling the towers down.

This thing hunts at night, and its hunger and taste for destruction grows with each day. Streetlights are uprooted like toothpicks, the water’s started tasting funny. People are going missing.

Those who’ve seen it and lived describe it as a giant, ferocious worm.

But the police won’t listen and the news doesn’t care. As the beast’s reign of terror continues, it falls to a small group of unlikely heroes to go into battle and save a community that no one else will.

But are a bunch of misfit teens and a mysterious loner enough to stop a force as powerful as it is ancient?

Reece Connolly is a North East-born and bred playwright and theatre-maker, and has been based in East London since studying Drama at Queen Mary University. He now splits his time between London and the North East.

He is a member and founder of Red Cape Black Cape Theatre – one of New Diorama Theatre’s 2017 Emerging Graduate Companies and shortlisted for Pleasance Theatre’s 2018 Charlie Hartill Award – writing, directing, and performing in shows which have sold out at the Edinburgh Fringe [A FISTFUL OF HUNNY – 2015] and the London Horror Festival [THE STOMACHING – 2017].

He has also written for Flux Theatre, The Pensive Federation, and Comedians Theatre Company, and been part of two consecutive Writers Groups at the Royal Court Theatre facilitated by Ali McDowell. He has also had work shortlisted by the Soho Theatre, and had work performed at Vaults Waterloo, Tristan Bates Theatre, Theatre N16, and Live Theatre.

We are also delighted to have Jake Smith on board, who is a director from the North East (Resident Director Almeida Theatre, National Theatre Directors Programme.)