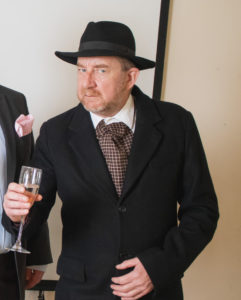 Dracula: The Travesty A Bitesize Interview with Stewart Howson Part One

We caught up with Stewart Howson who wrote Dracula: The Travesty to ask him a little bit more about the upcoming play and his incredible acting career.

Hi Stewart, Could you tell me a little about your background?
My background is blue with white stripes. I am originally from Sheffield South Yorkshire, where my great-grandfather was a music hall musical director. I studied Drama at Bretton Hall and started my acting career over forty years ago in Theatre with a company called Wearabout in Sunderland. I’ve lived in Northumberland for over thirty years and have worked at most theatres in the area (and all over the country too).

How old were you when you caught the acting bug?
About nine. I was hungry and would eat anything I caught. A local Am-dram my uncle was in were doing “The Pitsmoor Pageant” and a chap dropped out so I took over his part. He was over twenty years older than me. I argued with the director who was fifty years older than me. He had the good grace to agree that I was right and years later came down to London to see me in the West End.

Your career has taken you from Byker Grove to Love Actually, from Silent Witness to Coronation Street, and lots besides… Is there one role that you’ve particularly enjoyed?
The ones I didn’t have to sue the management for me brass. I’ve played a heck of a lot of very different parts in very different genres, some funny, some anything but. I enjoyed being Arthur the central Character in “Up n Under”, Godbers Comedy of The Year in The West End but also enjoyed being the shell-shocked soldier “Tyke Screever “ in “The Flag” by Jarrow’s Alex Ferguson for The Redgrave’s Moving Theatre. I also enjoyed the experience of having Liam Neeson feed me a gag in” Love Actually”

Do you have a preference for stage or screen?
My bank manager does. To be honest I am better onstage as my nose gets in the way of the camera.

How did you get involved with script writing?
I had a bad accident and started writing whilst I recovered. That play was a hit and things rolled on from there.

Where did the idea of Dracula: The Travesty come from?
In Hancock’s Half Hour Tony H once asked Patricia Hayes where the goulash came from and she replied “It’s all outta me head Mr Hancock”. Likewise this play.

I understand the show is very loosely based on the original Bram Stoker Dracula story. Without giving away any spoilers, what’s it all about?
Gothic nonsense, Vampires, Transylvania, Dracula , Garlic, Vampires, Whitby, Vampires, Chasing Dracula, some more Gothic nonsense, Vampires.. erm… Oh and thrillingly tracking down Dracula across Europe against the clock to save a woman’s life finding him and killing him but asking him nicely first.

How did David Hopper get involved with the project?
He lied about his age, his height, his shoe size and bribed the judges. No seriously he only bribed one, the others were his relatives. We were doing a re-tour of the show at Northumberland Theatre Co and couldn’t get the original Dracula actor so Hopper stepped in with very little rehearsal and went on tour with us. Ray Spencer told me to stand on his feet and not let him get behind me onstage. Hopper liked the experience of doing the show so much he came up with the idea of doing a an expanded version for the Customs House. It’s all his fault.

You’ve got three actors playing 20 parts, how does that work? 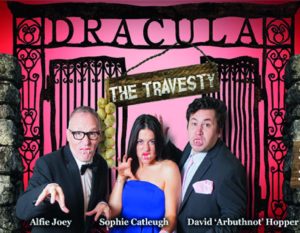 We split the wages twenty ways then multiply by three.

I hear there’s LOTS of fake blood?
I would consider it over-sanguine to answer any more questions in this vein.

Thanks for talking with us and we wish you every success with Dracula: The Travesty.