Home News PANTO STARS GO THE DISTANCE IN THE GREAT NORTH RUN – OH YES THEY DID!

PANTO STARS GO THE DISTANCE IN THE GREAT NORTH RUN – OH YES THEY DID!

Panto stars, staff and supporters of The Customs House have raised more than £5,000 after taking part in the Great North Run.

Sixteen people pounded the 13.1-mile route from Newcastle to South Shields to raise money for The Customs House Trust, the charity behind the arts venue, which is celebrating its 25th anniversary this year.

They included Executive Director Ray Spencer, who took part in full panto costume as his alter-ego, Dame Bella Ballcock, alongside Davey Hopper, the actor who plays his on-stage son, Arbuthnot, who was also in character. 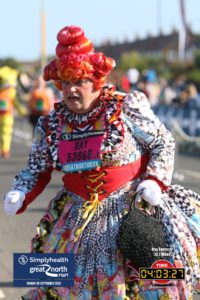 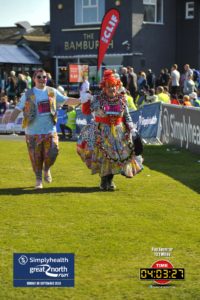 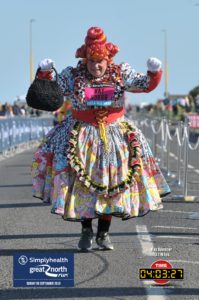 The rest of the team donned T-shirts sponsored by chemicals company, SafeSol Ltd. The Customs House also received support from Lee Tiffin, of Black Sheep Fitness Academy, who lent his training expertise and ran for the charity.

Darren Hymers, a members of the Board of Trustees, and box office assistant Mitchell Robinson also took part, along with several members of the public.

The majority of runners completed the half-marathon in less than two-and-a-half hours, with Mark – a member of South Shields Harriers – crossing the finishing line first, with a time of 1:22:38, followed by Lee at 1:36:24.

Ray said: “Thank you to everyone who cheered myself and Davey Hopper on and millions of thanks to those band of runners who supported The Customs House, the people who sponsored them and SafeSol UK, who sponsored our brilliant T-shirts.

“It was a fantastic atmosphere and to have raised so much money for a cause so close to our hearts is a cherry on the cake.” 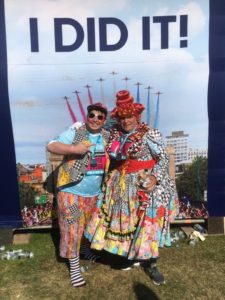