Its Friday and todays focus for #MyArtsAward week is young artists and their arts award. At The Customs House, young people have the opportunity to complete an Arts Award in all our regular youth groups. These include Customs House Youth Theatre, Filmmaking and Young Interpreters.

Jonathon Graham is an amazing member of our Customs House Senior Youth Theatre. We asked him to share his experience with you all. 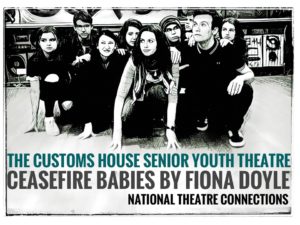 Staff at The Customs House know you really well Jonathon but can you introduce yourself to the world?

My name is Jonathon Graham, I’m 20 years old and from South Shields. I am currently in my second year at Newcastle University, studying for a BA Honours in Archaeology.

Tell us about Youth Theare?

I joined the Customs House Youth Theatre when I was 13 and met some really great people who I’m still friends with today. My first memories of Youth Theatre were devising scenes and working on a play based on ‘A Midsummer Night’s Dream’, however the highlight of my time in the junior group has to have been starring in a production of Tom Kelly’s dystopian ‘Their Very Souls’ in 2013 that required me to dance to ‘5,6,7,8’ by Steps (the moves to which I can still remember today!).

Since joining the senior group later that year, I have participated in the National Theatre Connections festival four times, and as a group we are now working on a play by Fiona Doyle called ‘Ceasefire Babies’ about the troubles in Ireland as part of the 2018 Connections Festival.

The Customs House has given me many opportunities over the years, though the best was definitely being able to write a play based on my own experiences at Youth Theatre: ‘Zip Zap Boing!’. The play (named after one of our favourite warm up games) was a situational comedy about a group of eight young people who were a week away from a final performance, but when their practitioner didn’t turn up underlying tensions came to a head and different sides of characters were revealed. The play was performed by an ensemble of young actors from across the North East aged between 16 and 22 on the last night of the Customs House Takeover Week in 2016 and is definitely one of my proudest achievements to date.

And What About Arts Award?

Doing the Arts Award extended my arts practice as it got me out of my comfort zone and engaging in activities I might not have considered before, such as performing a stand up comedy set which I did as part of my Gold Award challenge. I researched local comedian David Callaghan as an advanced practitioner because, his knowledge and advice as a
comedian were highly valuable to my Gold Arts Award challenge. For my leadership project, I was part of a team that put on a variety show at our sixth form showcasing the talents of the students. I was stage manager for the show and from this gained experience in a role I had never done nor considered before.

I would highly recommend that other people do an Arts Award because as a young artist it will not only improve your arts practice but widen your perspectives to other art forms you maybe hadn’t thought before. #MyArtsAward

My future career ambitions are to become a field archaeologist, something I have wanted to do since I was 10, and potentially go into a research post when getting covered in mud in a trench gets old. I would also like to get round to writing another play, a situational comedy about the realities of archaeology (write what you know) versus public and media perceptions of the discipline. Nevertheless the skills I have learned from being involved in the arts are highly transferable.

Not only has seven years of drama improved my team-working and leadership skills, but it has given me confidence speaking and presenting in front of groups of people; one saying from the same practitioner that got me to dance to Steps that sticks with me is “Leave your dignity at the door”, which has proved invaluable in many cases when I’ve been out of my comfort zone.

The Customs House would like to thank Jonathon for taking the time to share his experience. He is an inspiring young artist. We are positive he will achieve everything he wishes to and can’t wait to see him perform in ‘Ceasefire Babies’.

Read All About It! Spotlight Is A Perfect 10.

Welcome to issue 10 of Spotlight. In this issue,...
Read more

Don’t Miss A Thing. The Customs House Hour Available As A Podcast

Did you miss the brilliant first episode of...
Read more