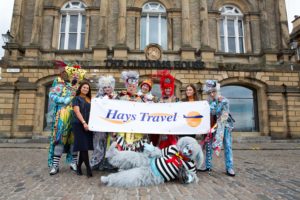 The Sunderland-based company has sponsored the annual panto at The Customs House for over a decade and is on board once again for The Lambton Worm.

“It is always a brilliant performance that many of our staff and their children enjoy each year over the festive season.

“I for one really look forward to taking my grandkids and having a good old laugh!”

Hays Travel is the largest independent travel agent in the UK, with branches all the over the country. The first one opened in Seaham, County Durham, in 1980.

Last year, Hays Travel was included in The Sunday Times’ 100 Best Companies to Work For list and it supports local communities via The Hays Travel Foundation.

Ray Spencer, executive director of The Customs House, who co-writes, directs and stars in the panto, said: “Hays Travel have supported us for such a long time, they are as much a part of our pantomime as shouting ‘he’s behind you’, booing for the baddie or cheering for the heroes. Thank you to John and everyone at Hays for their ongoing support.”

The Lambton Worm panto has been written in celebration of the 150th anniversary of the famous north east folk song – but the action takes place in the fictional land of Cooksonville, rather than County Durham.

Many of the names of places and people remain in the panto, however, from the original tale of John Lambton’s battle with a ferocious worm that had been terrorising the villages around his family’s estate.

Ray stars as the castle cook, Dame Bella Ballcock, with David John Hopper taking on the role of her hapless son, Arbuthnot. Steven Lee Hamilton plays The Brave and Bold Sir John and Eleanor Chaganis is The Princess.